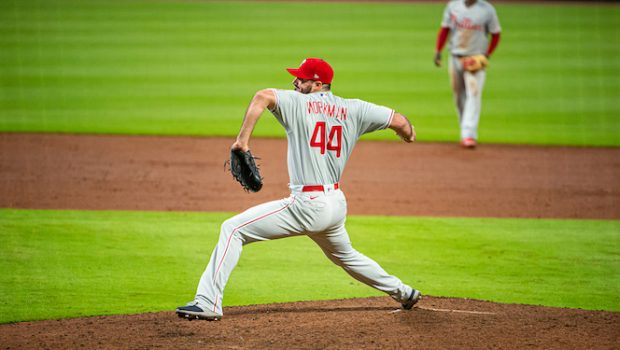 As MLB.com’s Todd Zolecki has pointed out:

Right-hander Tommy Hunter, who started the eighth, had a 2.19 ERA in his last 12 appearances, but he loaded the bases with two outs. Girardi summoned Brandon Workman (above). Starling Marte smacked his second pitch off the right-field wall to clear the bases with a game-tying double.

Workman allowed a leadoff single in the ninth and ultimately a two-out, walk-off single to Jorge Alfaro.

“It’s tough to swallow that one,” said Phillies catcher J.T. Realmuto, who hit a solo homer against his former club.

The loss moved the Marlins within a half-game of the Phillies for second place in the National League East. Second-place teams automatically qualify for this year’s eight-team postseason.

“We have to give them a reason to believe,” Realmuto said. “So far, we just haven’t gotten the job done. That’s plain and simple. We’ve got to make some adjustments back there. Maybe attack guys a little bit differently. Maybe I can call pitches a little differently. We’ve got to do something different, but the talent is there. I would hang our hat on that for now and let us earn their trust back.”