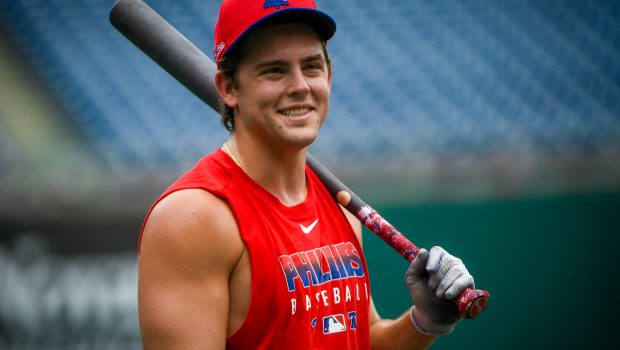 The Phillies infielder have brought Scott Kingery back to the majors as Johan Camargo has been placed on the 10-day injured list, retroactive to June 6, due to a right knee strain in a corresponding move.

Kingery returns to the majors for the first time since being outrighted off the 40-man last June.

The designation for assignment and subsequent outright was the culmination of a few seasons of struggles. Kingery hit at a league average level (.258/.315/.474) during the offensively-charged 2019 campaign, but he’s otherwise struggled mightily at the plate as a big leaguer. He’d posted well below-average numbers as a rookie in 2018, and he’s hit .144/.204/.250 in 143 trips to the plate since his sophomore campaign.

A second-round pick in 2015, Kingery tore through the minor leagues over his first couple seasons of pro ball. Baseball America ranked the University of Arizona product as the game’s #31 prospect in advance of his rookie year, and the Philadelphia front office signed him to a six-year, $24 million guarantee a couple weeks before his major league debut. That investment hasn’t panned out as hoped, but the 28-year-old will get another opportunity to try to solve big league arms.

Kingery, who is making $6.25 million this season under the terms of the aforementioned extension, has gotten off to a rough start with Triple-A Lehigh Valley.

Through 16 games, he’s hitting .185/.297/.296 while striking out in 34.4% of his plate appearances. That kind of swing-and-miss has been an unexpected issue for Kingery since 2018, as he’s never developed into the potential plus hitter some prospect evaluators anticipated. He’ll step into a second base mix that lost Jean Segura for a few months to finger surgery and has seen Nick Maton and Camargo hit the IL in recent days.

Camargo, signed to a one-year deal over the winter, has seen more playing time than envisioned because of Segura’s injury and Bryson Stott’s struggles. He got off to a nice start but had slumped of late, and he lands on the IL owner of a modest .246/.310/.338 line. Stott and Didi Gregorius figure to assume the bulk of the playing time up the middle, with Kingery on hand as a depth option.