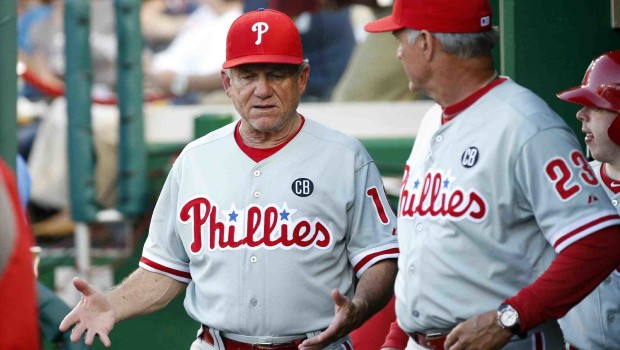 PHILS' BOWA: 'A COACH SHOULDN'T BE ANGRIER THAN THE PLAYERS'

After falling 11-2 Monday night to the Mets and dropping to seven games under .500 after 55 games for the first time since 2002, Bowa said it hasn’t been a pleasant clubhouse to be around in the last 24 hours.

“It was pretty quiet,” Bowa said. “It should be. You have players here in the big leagues who aren’t playing like big leaguers. I understand; it’s a long season and there are periods of time when I played and things went bad. But we’re going into June. And there are some players right now who need to pick it up. There’s no question about that.”

The Phillies held a 3:45 meeting at Nationals Park Tuesday prior to a game against the Washington Nationals and Bowa hoped that it is an eye-opener for the players.

“A coach shouldn’t be angrier than the players right now,” Bowa said. “I hope they’re angry.”

Bowa says he wonders how Phillies left fielder Domonic Brown, who has a .576 OPS, arrives at the ballpark with an “upbeat” attitude.

“I don’t know how he does that because if it were me, I’d be going nuts right now,” Bowa said. “The big thing you have to be concerned about is take away a six-week period from the equation, and the numbers aren’t very good. He did most of his damage in those five or six weeks. He made the All-Star team. In fairness to him, he’s hit some balls hard lately, but he’s not playing the way he is capable of. I just think there’s more in there than that. Ryno’s playing him every game. I think we’re going to find out one way or another if this guy can play up here. That’s what you have to do. [Sandberg] has been pretty patient with him. We have to keep going and see what happens.

“It’s not like we have a lot of options right now. We have Cody Asche out. We’re playing two kids; [Cesar] Hernandez had never played short in a big-league game before. He just started third. [Reid] Brignac came up as an extra man. Yet these guys have big-league uniforms on and they have to start playing better baseball.”