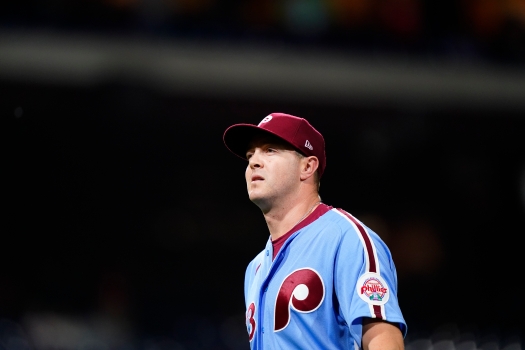 PHILS BLOW SWEEP, AND YOU CAN BLAME THE BULLPEN!

Phils big boss Dave Dombrowski thought he fixed the Phils bullpen over the winter when he brought in closer Corey Knebel.

And relief pitching cost the Phils yesterday as they tried to sweep the Dodgers in LA.

Gavin Lux atoned for his fielding mistake with a two-run double in the ninth inning, and the Dodges won 5-4.

The Phillies led 4-0 and were up 4-2 after Aaron Nola threw seven innings of four-hit ball. Lux drew a leadoff walk in the eighth and scored on Mookie Betts’ double off Jeurys Familia, but the reliever escaped with two groundouts.

Philadelphia then got within one strike of its first four-game sweep at Dodger Stadium since 1985, but couldn’t close it out.

The bases were empty when Cody Bellinger delivered a two-strike, two-out triple off closer Knebel (0-3). Ten pitches later, it was over.

After Chris Taylor walked, Lux drove home both runners with a drive to the right field corner. He set off a frenzied celebration at Chavez Ravine for a big crowd that included actor Tom Hanks, who put both hands to his head in disbelief.

“I’m sure (the error) was on Gavin’s mind all day long,” Dodgers manager Dave Roberts said. “I don’t want to say it’s the biggest win of the year with a short sample, but it’s a big one. Guys are feeling real good right now.”

Although the Phillies’ perpetually problematic bullpen failed again, the powerhouse Dodgers have done it to better teams. They hadn’t done it lately, though: The Dodgers had lost five of six and were staring at another disheartening defeat to an opponent that was significantly better than them all weekend.

“You can’t always be in front,” Bellinger said. “It’s nice to get hit with some adversity and see how we respond, because it’s not always going to be smooth sailing.”

Rhys Hoskins had a two-run single during only the Phillies’ second loss on a seven-game West Coast road trip, snapping a four-game winning streak. Garrett Stubbs had two hits and drove in a run, but the Phillies couldn’t get back above .500 for the first time since April 12.

Nola struck out eight and walked two while pitching out of a handful of jams. He was the second straight Phillies starter to last seven innings against the Dodgers, who had only let two other opposing starters survive that long all season.