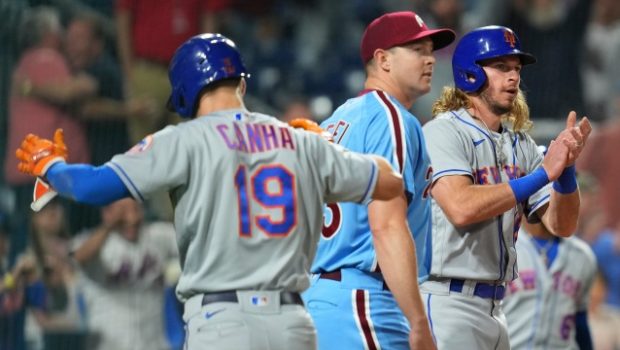 So there will be a lot more games for the Phillies to lose.

But none will be as cataclysmic as this one.

“Can’t anybody here play this game?”

And that’s what Phillies fans all over the world will be saying this morning.

The Mets erased a six-run deficit in the ninth inning to beat the Phillies 8-7.

Brandon Nimmo delivered a tying, two-run single, then scored on Starling Marte’s tie-breaking double to end a string of 857 consecutive losses by MLB clubs when trailing by six runs or more in the ninth, according to the Elias Sports Bureau.

With the Mets trailing 7-1, Marte led off the inning with an infield single against James Norwood and scored on Francisco Lindor’s two-run homer.

Mark Canha added an RBI infield single that caromed off pitcher Corey Knebel (0-2), and J.D. Davis had a pinch-hit RBI double before Nimmo and Marte finished off the high point of the NL East-leading Mets’ season so far.

Bryce Harper and Nick Castellanos homered for the Phillies, and Aaron Nola pitched seven sharp innings. The Phillies have lost five of six.

“That’s about as hard as I’ve been through,” Phillies manager Joe Girardi said. “This is as tough as it gets.”