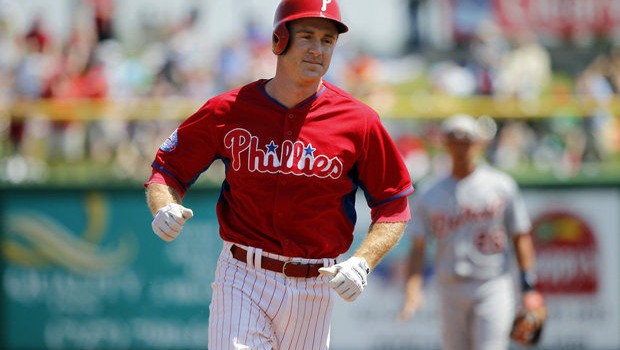 Chase Utley culminated an impressive spring in which he hit .412 with 11 RBIs and four home runs.

It was only an exhibition game, but the competitive nature of the Phillies and the Pirates was on display early in yesterday’s last pre-season game at Citizens Bank Park.

Charlie Morton hit a pair of Phillies batters in the first inning, and the umpires talked to both managers.

All this after Pittsburgh and Philly cleared the benches earlier this week during a spring training game.

“There were warnings put out for obvious reasons,” Phillies manager Ryne Sandberg said. “I don’t have any explanation for Morton, but it was a little bit scary. Two days before (the season) balls going all over the place. That was my concern to the umpire.”

Pirates manager Clint Hurdle said after the game that Morton, who had hip surgery last September, is headed to the disabled list with recurring trouble. Morton will be replaced in the rotation by former Phillie Vance Worley.

“I’m out there throwing behind guys. That’s crazy,” Morton said. “You want to be professional out there, but that’s a joke.”

Morton threw behind Chase Utley in the first inning, did the same while facing Sizemore in the second and almost hit Carlos Ruiz in the face.

Even warmups were a struggle, as Morton airmailed a pitch over the head of catcher Tony Sanchez before the second inning. Sanchez had to get out of his crouch to catch most of the rest of the warmup pitches.

Morton had an 8.47 ERA in five spring outings. He said he’s not feeling pain in his hip, but generally feels out of sorts.

“It’s just weird in my delivery,” he said.

Said Hurdle: “What you saw today was a guy battling who wasn’t able to battle.”

Last Monday, the Phillies and Pirates tangled during Pittsburgh’s 18-4 romp at its spring site in Bradenton, Florida.

Utley drove in two runs and David Buchanan pitched five scoreless innings in the final tuneup for both teams.

Utley culminated an impressive spring in which he hit .412 with 11 RBIs and four home runs.