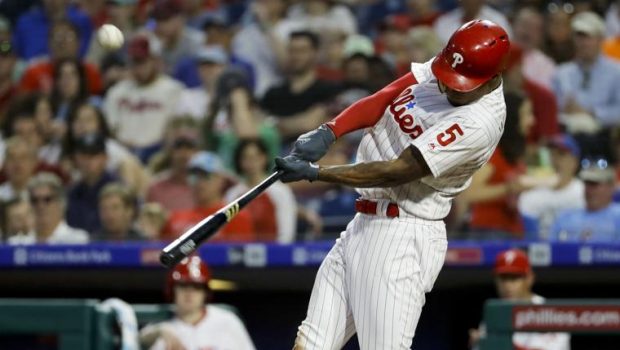 It may seem far-fetched to call the Phils-Braves series that srtarted last night at the Bank a showdown, but that’s just what it is:

Two teams battling for supremacy in the NL East when most experts thought they would be bringing up the rear.

Nick Pivetta struck out seven over seven innings and Nick Williams (above) and Aaron Altherr each homered to lead the Phillies to a 3-0 win over the Braves, moving the Phils to within a half-game of the first-place Braves..

“It’s a big series, for sure,” Altherr said. “Especially being at home, we definitely want to take these games.”

In a year where the Eagles won the Super Bowl, Villanova won a national championship and the 76ers won 52 games, perhaps Philly fans need more than 45 games to hop on the bandwagon.

Citizens Bank Park — the site of an NL-record 257 straight sellouts that ended in 2012 — was thin with just over 21,000 fans announced on a gorgeous night.

Kapler was heartened that a Braves-Phillies series has first place on the line.

“I’m a baseball fan at heart and thinking about that gives me gooesebumps,” Kapler said.

“It was kind of amazing with the hitters seeing the guys so many times, it was just a 3-0 game,” Braves manager Brian Snitker said.

The right-handers each delivered outings worthy of two teams fighting for first.

Pivetta (4-2) allowed only four hits, walked one and won his third straight start. Seranthony Dominguez tossed a scoreless eighth and Hector Neris finished the five-hitter in the ninth with his ninth save.

“Just build off the energy that we have going on in here just makes my life a lot easier,” said Pivetta, who has allowed one run in his last 19 innings.

Foltynewicz (3-3) allowed six hits and struck out five in six innings. His lone run allowed came when Williams hit a solo shot in the fourth, an opposite-field poke to left for his third homer of the year. The Phillies have homered in 16 straight games.

“It’s one pitch, really,” Foltynewicz said. “I was upset about that, just the way Nick was throwing tonight. I was going to try and not let anybody score because of the night he was having tonight.”

Altherr pinch hit for Pivetta in the seventh and crushed a two-run homer to left off Shane Carle for a 3-0 lead.

The Phillies and Braves don’t play again after this series until they face each other seven of the final 10 games of the season.

Maybe in September, they’ll be playing for the title.