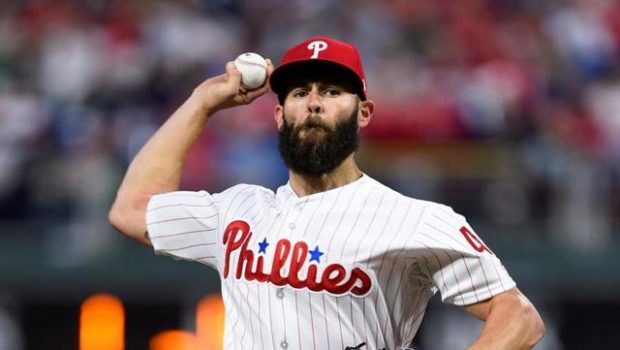 PHILS ARRIETA WILL START AGAINST NATS, BONE CHIPS BE DAMNED!

The Phils start their post-All-Star-game season Friday night, and manager Gabe Kapler has named starters for the first two games of its three-game series against Washington:

The Phils will face Nats ace Max Scherzer (9-5, 2.30 ERA) on Sunday, with or without Jake Arrieta.

“As of now, Jake will make his start for us against the Nationals, and we’re going to support him,” Kapler said on 94 WIP. “Jake is a competitor. And for the Phillies, it’s always worth considering if Jake at 85% of himself is a better option than what we have at Triple-A. It’s not terribly uncommon for veteran pitchers to successfully pitch with issues like this one.”

Arrieta is 8-7 with a 4.67 ERA, but he has a 6.63 ERA in his past seven starts. Kapler said Arrieta will have an MRI exam this week on his right elbow.

“He’s been effective, but he can’t quite finish the way he should be able to,” Kapler said.