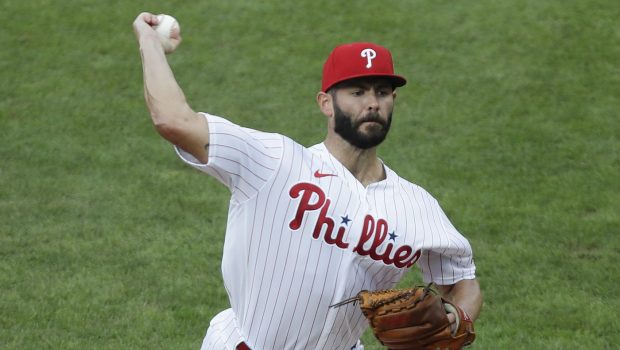 PHILS ARRIETA FLASHES HIS CY LOOK WHILE MOWING DOWN BRAVES!

Now that’s the Jake Arrieta the Phillies thought they were signing two years ago for three years and $75 million.

The Arrieta who won the Cy Young award for the Cubs in 2015.

He pitched six shutout innings for his first win in more than a year and Jay Bruce and J.T. Realmuto homered to lead the Phillies past the Atlanta Braves 5-0.

Arrieta (1-1) tossed three-hit ball and struck out six for his first win since June 30, 2019. He made seven more starts before he was shut down with season-ending surgery on a bone spur in his pitching elbow.

”Now I have the ability to throw my breaking balls with more effect,” Arrieta said. ”Everything is coming out of my hand a little more crisp.”

”I have more weapons at my disposal that I didn’t necessarily have the last year or two,” Arrieta said. ”I’m not worried about the elbow flaring up in the third or fourth inning.”

Right fielder Bryce Harper made a diving catch in the fifth that earned a fist pump in appreciation from Arrieta.

Realmuto continued his hot streak, homering for the third straight game, with a 427-foot solo shot in the fourth off Braves starter Kyle Wright (0-2). Wright put the next runners on base and Bruce hit a three-run homer to make it 4-0.

Realmuto’s contract expires at the end of the season and, while he hasn’t said much publicly during the season about his desire for a new deal, he might be making more noise than anyone in baseball at the plate. His homer set off the ringing of the Liberty Bell above the outfield bleachers, blasts from air horns and chants of ”Sign J.T.!” from a dozen or so fans pressed against a fence outside the stadium.

Yankees manager Aaron Boone complained about the air horn during a series this week to no avail — the dozen or so fans who call themselves the Phandemic Krew are outside Citizens Bank Park, giving the umpires no recourse to make the noise stop.

The four-run fourth was enough to give Arrieta the win in his first start without allowing a run since Aug. 6, 2018.

”I thought he threw the ball well tonight. I thought he didn’t get it over the middle of the plate too often, and when he did, he’s got so much movement on his ball, it’s kind of tough to square him at times,” Braves shortstop Dansby Swanson said.

Jose Alvarez, Tommy Hunter and Deolis Guerra combined on three scoreless innings to help the Phillies complete their first shutout at home since April 26, 2019. Didi Gregorius added an RBI single in the eighth.