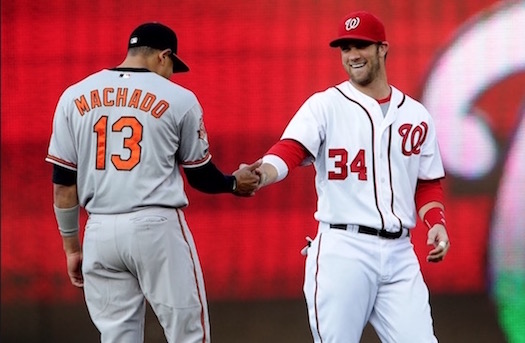 PHILS ARE STILL IN THE GAME FOR MACHADO-HARPER CHRISTMAS GIFT!

It feels like the two free agent mega stars — Manny Machado and Bryce Harper — are still weeks away from signing as they endeavor to set records for baseball’s biggest ever contract at $325-million plus.

Harper’s agent Scott Boras appeared under the Christmas tree at the Mandalay Bay and spoke again about what an “iconic” and “generational” talent his client is on the heels of several days’ worth of meetings with many teams, including one that’s apparently a mystery. A “mystery” owner was said to have shipped in for a clandestine off-site visit, but in reality, the whole market remains somewhat mysterious.

Meantime, Manny Machado’s agent Dan Lozano, who unlike Boras is never seen anymore, spent the meetings setting up future meetings, with at least three arranged but some question surrounding whether his three extra alleged unidentified teams – or “mystery teams,’ if you prefer – actually exist.

While we don’t seem much closer to a deal for either major star, there were a few hints, theories and stories heard that could be key to solving the somewhat mysterious markets.

The Phillies remain a competitor for both star players, though with their early winter moves, they bring one reason to wonder whether they are at all confident they’ll land either one.

The Phillies did a nice job to land a star shortstop Jean Segura and a star outfielder Andrew McCutchen, which not only bettered the team but looked like a way to cover themselves in case the improbable happened and they got neither mega star.

Though owner John Middleton spoke about how they planned to spend stupid money, of course they have to have someone to take it. While Philly is a historic city and a beloved one by a string of Phillies stars who appreciated the passion of the fan base, it isn’t the type of glitzy city that easily attracts stars from elsewhere. Word that Harper, as a frequent visitor while with the divisional rival Nats, isn’t necessarily enamored of Philly, was suggested in this space a couple weeks back. And what’s more, there’s some belief that both he and Machado wouldn’t mind winding up 90 miles to the north in New York.

Phillies people say they are still pursuing both players even after acquiring a big-time player for each of their positions. But you have to wonder, too, whether Machado might see the presence of another star shortstop as a potential complication since he’s made clear he doesn’t want to switch back to third base.

While Machado is known and liked by almost the entire Philly front office, whose key members almost to a man were in Baltimore when Machado became the No. 3 overall pick in the 2010 draft (two spots behind Harper), he doesn’t look like a great fit in Philly for three reasons:

1) As mentioned, his shortstop spot seems to have been given away already,

2) The Phillies are already righty heavy after the acquisitions of Segura and McCutchen and trade of Carlos Santana. Three lefty swingers remain: Cesar Hernandez (a switch hitter) plus Nick Williams and Odubel Herrera, though all three could wind up on the block after their acquisitions.

3) Philly is a town that appreciates hard work, and Machado didn’t exactly endear himself to townspeople (based on the airwaves) by failing to run hard on a couple plays in October, then saying aloud that hustling really “isn’t my cup of tea.”

Harper, meantime, is left-handed, and if anything, runs too hard and plays too recklessly on occasion. That they’d like in Philly: