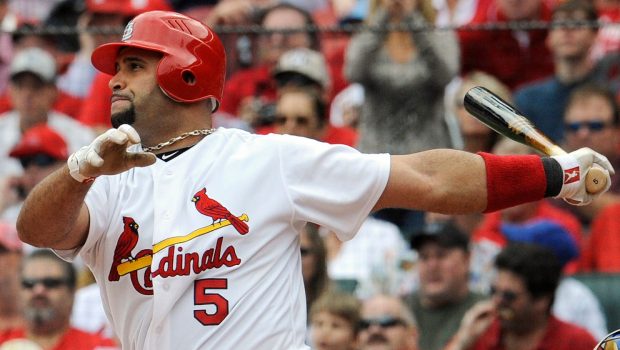 PHILS ARE MORTAL! LOSE TO CARDS ON REVERSED PLAY AT PLATE

Albert Pujols hit his 684th homer and Tommy Edman drove in the tiebreaking run with a sacrifice fly in the eighth inning to help the St. Louis Cardinals beat the Phillies 4-3 after losing the first two games of the series and six of seven.

Kyle Schwarber hit his NL-leading 28th homer for the Phillies, who had won three in a row.

Edman drove in pinch-runner Dylan Carlson with a short fly to center. Carlson was originally called out at the plate, but the play was overturned after a replay review.

Jordan Hicks (2-4) picked up the win with a scoreless inning of relief. Ryan Helsley got his seventh save.

Matt Vierling broke a 1-all tie with a run-scoring single in the fourth before Schwarber’s homer an inning later put the Phillies in front 3-1.

Cardinals starter Andre Pallante allowed three runs and nine hits over 5 2/3 innings. He struck out four and walked one.

Lars Nootbaar broke the Cardinals’ 19-inning scoreless stretch with an RBI single in the second.

Schwarber scored on a single by Nick Castellanos in the first.

Philadelphia shut out the Cardinals in the three previous meetings.