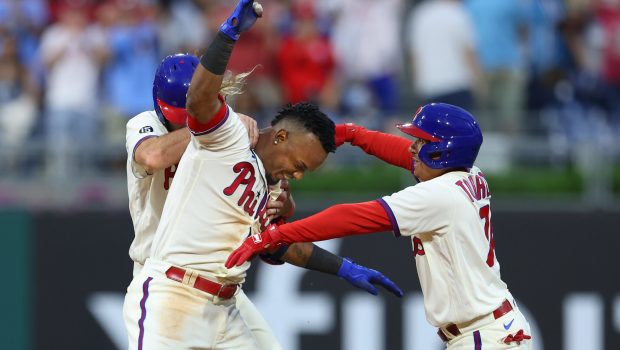 PHILS ARE A WALK-OFF WONDER: 3RD STRAIGHT SINKS THE YANKS!

The Phillies and their fans better get used to walk-off wins.

Because last night’s was their third in a row.

Jean Segura scored Ronald Torreyes with an infield single in the 10th inning for his second straight game-ending hit and the Phillies won 8-7 over the Yankees at the Bank.

Travis Jankowski led off the bottom of the inning against Aroldis Chapman (4-2) by reaching on the pitcher’s error. Jankowski bunted to the left side of the mound, and Chapman fielded the ball, checked Torreyes at second base, then hurried a throw high to first. Torreyes, the designated runner, advanced to third.

Odubel Herrera popped out, then Segura hit a hard grounder to third baseman Gio Urshela, who dived toward the line to catch it but couldn’t relay the ball home ahead of the sprinting Torreyes.

Segura hit a two-run single off the wall in left-center Thursday to wrap a 4-3 win over the Braves. Luke Williams’ homer in the ninth on Wednesday sent the Phillies to the first of their three dramatic wins.

Sanchez hit a solo homer and had an RBI single, and Rougned Odor also went deep for the Yankees, who have lost six of eight.

Chapman, the Yankees’ closer, lost his second consecutive outing. He gave up two homers in his team’s 7-5 loss at Minnesota on Thursday.

The Phillies scored four runs in the first against Jameson Taillon, who recorded just one out before being lifted. After three singles to open the game, Harper followed with a two-run single to center. Two batters later, McCutchen hit a sacrifice fly, and Taillon’s day was done after surrendering Bohm’s RBI single.