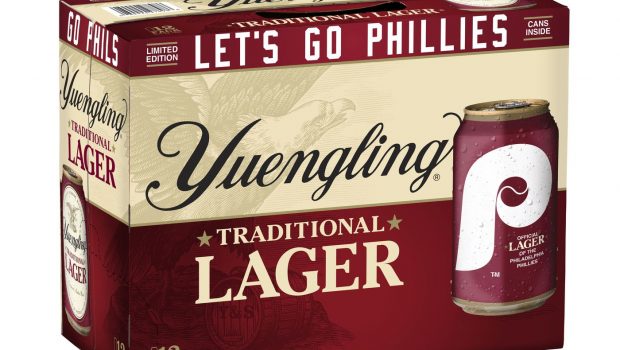 Yuengling Traditional Lager has doubled down on the Phillies.

The 190-year-old brand has been named the “Official Lager of the Philadelphia Phillies.”

As a sponsor of the Phillies since 2017, Yuengling will soon release Phillies-branded cans of their lager that feature a retro version of the team’s logo. The special edition cans will be available in 12-packs on beer sellers’ shelves in the area, as well as in 16-ounce cans at Citizens Bank Park during the upcoming 2020 baseball season.

“We are excited that our fans will once again be able to enjoy the iconic taste of America’s Oldest Brewery, both at the ballpark or in their own home,” Phillies executive vice president David Buck said. “All while cheering for their favorite baseball team.”
Last year, the company became the top-selling craft beer company in the country for the fifth year running.
Click Here To Comment
0 admin March 11, 2020 Food and Drink, Phillies