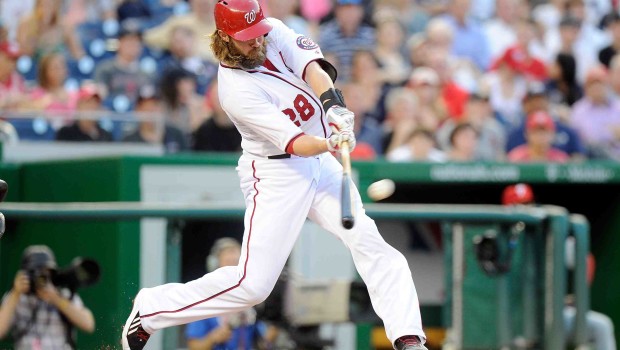 PHILS: AND THE HITS DON'T KEEP ON COMING

Another runless game as the Nationals pound away in D. C.

The Nationals throttled the Phillies 7-0 behind eight scoreless innings from Jordan Zimmermann, who rebounded from a ragged May to allow just five hits in an overpowering first start of June.

Jayson Werth (photo above) started the barrage against rookie right-hander David Buchanan with a two-run, bases-loaded double. Span chipped in three hits. In the sixth inning, Ian Desmond and Anthony Rendon bashed mammoth homers, turning the game into a laugher.

Ryan Zimmerman’s presence in the lineup thickened the Nationals’ offense — all of a sudden, Desmond, now leading the Nationals with 11 homers, was batting seventh. His play in left field showed promise — he made routine plays look routine.

Teammates chided Zimmerman about his new outfield position. In his locker sat a ball marked, “First hit 6-3-14,” placed there by Kevin Frandsen. “He’s taken me under his wing since I got called up,” Zimmerman said.

After Zimmerman squeezed Marlon Byrd’s sky-scraping popup in the sixth, Zimmermann (the pitcher) joked with him, “The next one is going to be over your head, so be ready for it.”

“At first, just like anything, you’re a little hesitant,” Zimmerman said before the game. “You don’t want to learn a new position. Like I’ve said, any other guy in this room would do whatever it takes to win. I think all of us realize we don’t have unlimited years to have a team like we have right now. My goal is to win, win as many games as we can, and get to the playoffs and try and do something special. This gives us the best chance.”

Zimmerman believes the throw from the outfield, because it requires less precision and allows for more time, will be easier on his surgically repaired right shoulder. Despite inexperience, Zimmerman believes he can achieve adequacy.

“I feel like I’m athletic enough to blend in and not cause any problems,” Zimmerman said.

Zimmerman may be better than that. Tuesday night, Chase Utley flared a soft liner to shallow left, a tricky play off a left-handed hitter’s bat. Zimmerman sprinted in, and with his tongue sticking out, stabbed the ball on the run. Back in the dugout, Span told outfield coach Tony Tarasco, “That was pretty good.”

“I wasn’t expecting him to close on it as fast as he did,” Span said afterward. “I thought if he was going to catch it, he was going to have to slide. All of a sudden, I saw him close on the ball. Pretty impressive.”

The Nationals know there may be line drives that freeze him or throws that sail to the wrong base or sail past a cutoff man. “We’re willing to accept all of that,” Williams said. “His concern is getting back into the lineup.”

Some Nationals officials believe Zimmerman’s defensive switch may help his offense. They think back to last September: His defensive improvement lightened his mental strain, and Zimmerman blasted 11 homers.

In his first at-bat Tuesday night, Zimmerman laced a double into the left field corner. With two outs in the fifth inning, Phillies Manager Ryne Sandberg chose to intentionally walk Adam LaRoche. Avoiding the Nationals’ left-handed cleanup hitter meant facing Zimmerman. He fell behind, 0-2, then lashed a curveball into the right field corner for an RBI double.

“He’s a huge bat,” Zimmermann said. “Teams have to pitch to our guys. One through eight, we’re pretty solid.”

Williams said he did not view Zimmerman’s position switch as permanent. “I think he’s a third baseman who’s been pressed into duty,” Williams said. Still, Williams said Zimmerman will be the Nationals’ left fielder for the “majority” of games, at least until Bryce Harper returns in early July.

When Harper comes back, Williams will face difficult decisions. Their infield defense would be diminished with Zimmerman at third, Rendon at second and Danny Espinosa on the bench. Harper could shift to center, but then the Nationals would lose Span’s defense and suddenly hot bat — he’s hitting .400 with 11 runs since May 20. Zimmerman could play first, but LaRoche has been Washington’s most productive hitter.

“That’s too far away,” Williams said. “The thoughts about when Bryce comes back is that he’ll go back into left field and Zim will come back to the infield. That’s the initial thought. But we have to see how everything goes.”

Span said he would chatter with Zimmerman constantly, making sure Zimmerman shifted over a few steps depending on the hitter; Zimmerman asked where he should stand with the pitcher batting. Span knew it would be a strange experience. Zimmerman may brush aside the oddity of switching positions: “I really don’t get caught up with that,” he said. But he couldn’t hide it.

“You can kind of see it on his face,” Span said. “I’m not sure if he’s nervous or whatever. It’s different.”