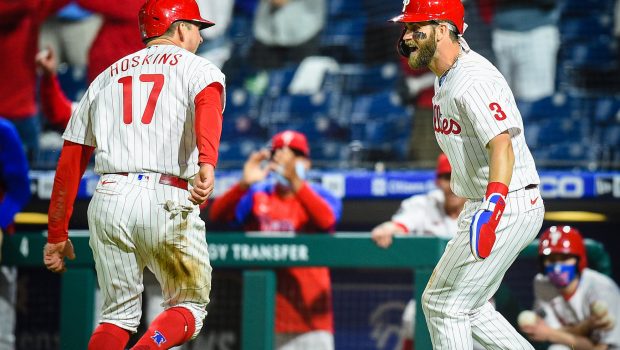 PHILS AND RHYS HOSKINS RIDE THEIR MAGIC CARPET TO ATLANTA!

The whole town — from Lansdale to Wilmington to Northern Liberties — is talking about the Phillies.

Their 5-1 start, especially their relief pitching, has made many of us feel that this is their year to break their decade-long streak of October vacations.

They swept Atlanta in their opening series and won two out of three against the Mets earlier this week, including an 8-2 win on Wednesday.

First baseman Rhys Hoskins leads their offense with 10 hits and four RBIs. He is batting a blazing .417 through his first six games. Shortstop Didi Gregorius and catcher J.T. Realmuto both have seven hits. Right fielder Bryce Harper only has five hits, but he has walked six times.

The Phillies rank sixth in the MLB in team batting average, hitting .262 so far. They will be facing an Atlanta pitching staff that is No. 11 with a team ERA of 3.40.

Right-handed pitcher Zack Wheeler is gearing up to face the Braves for the second time in less than a week when he takes the mound on tonight. Wheeler allowed just one hit and struck out 10 batters in seven innings of work. While his pitching was fantastic, it was his bat that really made the headlines. Wheeler had two hits and drove in two runs in the 4-0 win at Citizens Bank Park.