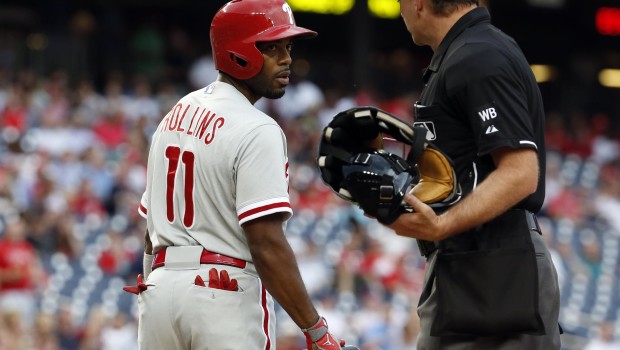 The Phillies’ laconic attitude and mediocre 2014 has been annoying to Phillies fans everywhere, and now a former Phils great who should be in the Hall of Fame has had enough.

Pete Rose, who was a key element on the team’s 1980 World Series victory, doesn’t like Jimmy Rollins.

Rose however, says that his disdain for Rollins goes back much further than this season.

The Phillies could have a difficult time rebuilding their aging lineup due to long-term contracts that have been committed to the likes of Ryan Howard, Chase Utley, Rollins, Cole Hamels and Jonathan Papelbon.

Rollins though, has hinted that he may be open to waiving his no-trade clause after he surpasses Schmidt’s mark, but outright refused to do so last season, saying that he hoped to add his name to the franchise’s record book before moving on.

Rose went on to call out a perceived lack of leadership in the clubhouse during this difficult stretch that has seen the Phillies fall a season worst eight-games under .500 and 6.5 back of the Braves in the division race.

“Sometimes, when you don’t have spark, someone in the dugout has to create something. I thought [Larry] Bowa would do some of that,” Rose said after Bowa ripped the Phillies for a lack of heart and effort. “Sandberg was a real good player. He was a strong willed player. I know that he’s not a yelling type of manager.

“When I was with Philadelphia, if guys didn’t play hard, I didn’t turn over any tables. See, that’s where Sparking [Anderson] was right.. There are three kinds of ways you can handle guys; if a guy needs kicked in the butt, kick him. If a guy needs to be patted on the back, pat him. If a guy needs to be left alone, leave him alone..A manager has to find out who he is going to war with every night and know who he wants to be in the foxhole with him.

“As a manager, I don’t know if Ryne knows his personnel yet. He’s only been there since January.”

Both Rose and Bowa forged a reputation for taking a hard-nosed approach to the game but after the Phillies dropped to the Naitonals 7-0 Tuesday night in Washington, it appears that their criticism is falling on def ears.