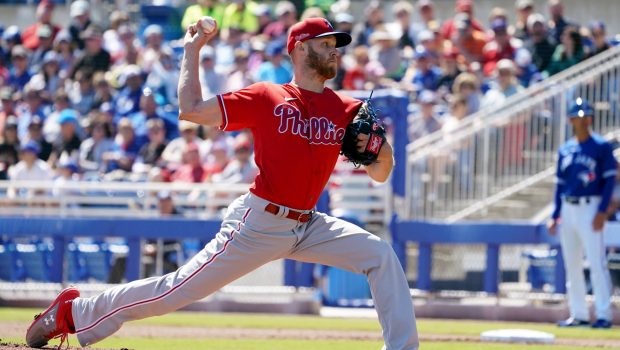 The good news is that Philes ace Zack Wheeler threw 45 pitches in two-plus innings yesterday in an intrasquad game.

The bad news is that he was scheduled to face the Blue Jays, but the threat of rain prompted the Phils to pitch him earlier.

Wheeler said he has experienced no soreness since the beginning of camp.

“I don’t think it matters,” Wheeler said, per MLB.com.

“I mean, you probably want to get into a game, but I’ve been communicating with them the whole time and I’m pretty honest with them, so if I’m feeling like I’m ready and I’m not going to hurt the team, I’ll do that. How I’ve been pitching and how the ball is coming out of my hand — if I can feel like the slider is there and the cutter is there, those are tricky pitches to throw. So if I feel it’s coming out of my hand good and I have control of it, I think I’ll transition into the game fairly easily. So I think I’m game ready even though I haven’t pitched in a game.”

“Felt good,” Wheeler said. “Mechanically, I felt good, on time. The ball was coming out good. A few misses here and there, but that’s to be expected. Coming out of it healthy is my biggest thing right now.”