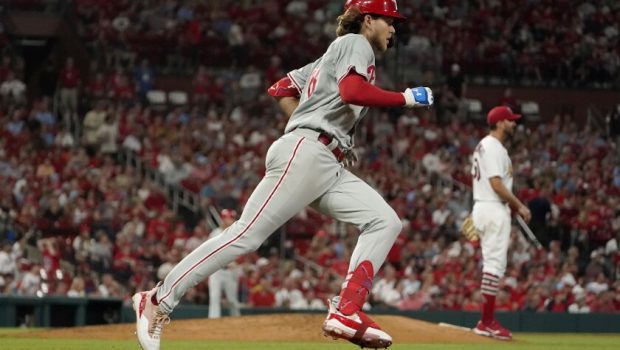 BOHM AND WHEELER PUT PHILS A GAME UP ON CARDS FOR WILD CARD!

Bohm had not homered since June 6.

“With that guy, you’re expecting anything on any count. He’s been doing it so good for so long,” Bohm said about Wainwright. “I’m from the Midwest, he was throwing World Series games when I was growing up and here we are. So that’s pretty cool.”

The Phillies won for the sixth time in eight games, and the Cardinals have lost seven of their last eight.

“You don’t see that too often,” Philadelphia manger Rob Thomson said. “He was dynamite.”

The right-hander limited the Cardinals to five hits with one walk and struck out five.

“It’s a tough challenge. Good lineup. Good team,” Wheeler said. “You think about it coming in. We stayed with the plan for the most part on how to attack them. We never had to go to Plan B.”

Seranthony Domínguez pitched the eighth, and Brad Hand came in for the ninth to get his fourth save in five opportunities. It was Hand’s 130th career save in his 499th game.

The 40-year-old Wainwright (6-7) pitched nine innings for his longest outing this season. He allowed five hits and struck out three with no walks.

It was Wainwright’s 28th complete game, most among active MLB pitchers. It was his fifth career loss when pitching a complete game.

“That’s a team of power hitters over there,” Wainwright said. “Bohm got me. That’s what a good lineup does. Wheeler was outstanding. He’s just great.”

He made his fifth consecutive start without Yadier Molina behind the plate. The last time Wainwright made five starts without Molina was a six-start stretch from July 14-Aug. 10, 2019, when Molina was out with a right thumb tendon sprain.