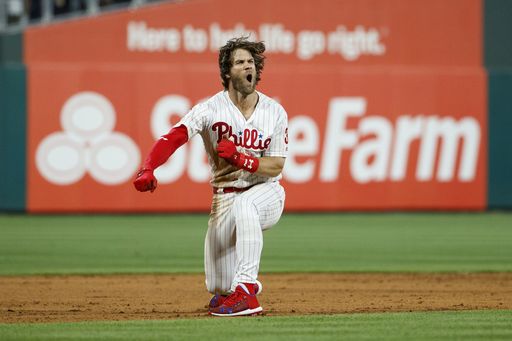 PHILS’ 9TH-INNING LIGHTNING GAINS A GAME ON THE BRAVES!

Bryce Harper’s  two-run double off Dodgers closer Kenley Jansen rallied the Phillies to a 9-8 win over the Dodgers and pulled them to within 8 1/2 games of NL East-leading Atlanta.

”That’s what baseball is all about,” Harper said. ”Against one of the best closers, it’s always fun.”

Pinch-hitter Andrew Knapp hit a double with one out after Adam Haseley’s grounder hit off Jansen’s right foot near the ankle and rolled to first base. Cesar Hernandez followed with a single and Scott Kingery’s bloop single to center scored Knapp to get the Phillies within a run. Harper then ripped a ball to the gap that bounced off A.J. Pollock’s glove and went to the wall to win it.

”That was a huge moment for Bryce,” Phillies manager Gabe Kapler said. ”You could see how important that was for him.”

The Phillies rebounded from a 16-2 loss in the opener of a four-game series against the two-time defending NL champions.

Harper hit a three-run homer and had five RBIs for the first time since April 19, 2017, at Atlanta. Brad Miller and Kingery also connected for the Phillies.

Hector Neris was ejected after hitting pinch-hitter David Freese in the back with the next pitch after Beaty homered, and Kapler also was tossed.

Jansen (3-3) has four blown saves in 24 tries. He was limping in the clubhouse after the game.

”I should’ve come out of the game,” Jansen said.

Kingery drove his 13th homer out to left to give the Phillies a 1-0 lead in the first. Muncy crushed his 25th homer on an 0-2 pitch in the second to tie it at 1.

After J.T. Realmuto reached on a throwing error on third baseman Justin Turner to start the second, Miller hit a two-run shot.

Harper then blasted his 17th homer to deep center with two outs to make it 5-1.

Bellinger lined a two-run shot in the fourth and Pollock connected one batter later to cut it to 6-4. Pederson launched his 21st homer in the fifth.