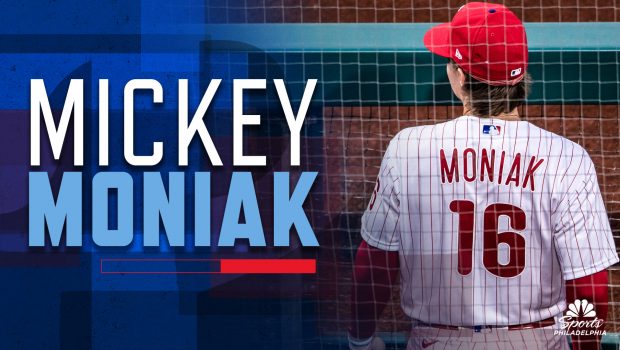 Mickey Moniak played left field last night in his major league debut with the Phillies, going 0-for-4 with a walk.

“I had a hard time getting it out,” Moniak said when asked about telling his father by phone.

“He started bawling on the phone, I could tell. It was a cool moment.”

“I had a four-hour window between getting the news and the car service taking me to Philly,” Moniak said. “I made a lot of phone calls, and tried not to leave anyone out. Every one was special and something I’ll never forget.”

“There’s a lot that comes with being the No. 1 pick,” Moniak said. “At first, I didn’t think it would affect me at all, being an 18-year-old kid, getting into pro ball and never having a struggle in my life. Once those struggles hit, it kind of hit me. I had to take a step back. In almost every interview I’ve done, I’ve kind of treated it as a blessing to be able to go through those struggles and keep a level head. Keep working toward that goal, and that’s to get to the big leagues. And now that I’m here, I think that, I won’t say it validates the No. 1 pick, but it’s a step forward.

“It’s a special moment for me and it takes a little bit of weight off the shoulders knowing that I got here, but the work is not done. There are long days and seasons to be had. I’m just excited to get started.”