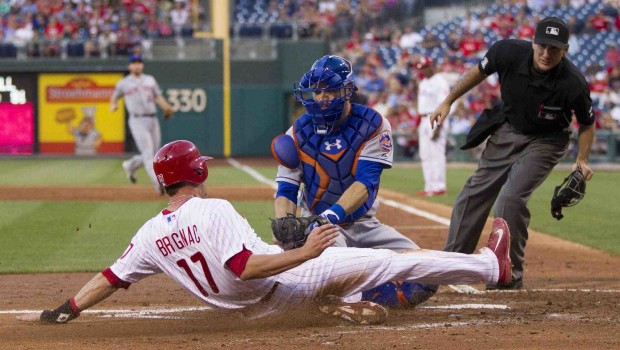 So, let’s wrap up the just completed Phillies homestand.

No-hit by Josh Beckett, shut out by Clayton Kershaw and dropped two extra-inning games to the Mets. These 11 games at Citizens Bank Park were an opportunity wasted.

It came full circle Monday night, when the Phils lost to the Mets, 11-2, for their largest margin of defeat during the 4-7 homestand.

“It was embarrassing,” Carlos Ruiz said. “Sometimes things don’t go your way, so we need to stay strong, come back the next day and play ball. It’s frustrating right now, but if we stay strong, a lot of good things can happen.”

After dropping four of five to the Mets, the question has to be asked: Is this what is to be expected the rest of the way?

“I’m not a negative person, so, no,” Chase Utley said. “Yeah, we didn’t play that well on this homestand. I think it’s pretty obvious. But there’s nothing we can do about it now, but try to improve. Go on the road and try to win some games.”

Mistakes and miscues in the field and on the basepaths proved costly again Monday night. In a close game in the sixth, lefty reliever Mario Hollands got the double-play ball he was hoping for from Lucas Duda, but Utley botched it for his fourth error of the year. A batter later, Wilmer Floresblooped a ball down the right-field line for a two-run double.

In the bottom half of the inning, Utley followed up his physical error with a mental one. After Utley doubled and was advanced to third, Marlon Byrd laced a ball out to Matt den Dekker in center field. Utley got a bad read on the ball off the bat, and he didn’t go back to the base to tag up, costing Philadelphia another run.

The Phillies also had a runner thrown out at home. Reid Brignac rounded third on a base hit by Ben Revere in the third. But den Dekker had the ball in his glove before Brignac had even reached third, and the ensuing play at the plate wasn’t close as Brignac was tagged out.

“This was a game that slipped away,” manager Ryne Sandberg said. “A mistake and then the gates opened up.”

For the Phillies, there has just not been enough offense or consistent pitching to overcome mistakes. Between May 5 and Sunday, they accrued a .227 team batting average, which ranked 13th in the NL. Their pitchers didn’t fair much better during that stretch; they ranked 12th in the NL with a 3.89 ERA.

Roberto Hernandez was cruising in his outing — retiring 10 straight batters between the second and fifth innings — but things fell apart for the righty in the sixth. Hernandez was pulled after 5 1/3 innings, allowing five runs — four earned — on five hits and two walks while striking out five.

It doesn’t get any easier for the Phillies as they prepare for their upcoming road trip. Philly is on tap to face Jordan Zimmermann, Stephen Strasburg and Doug Fister in its series at Washington, andJohnny Cueto, Alfredo Simon and Homer Bailey in a three-game series at Cincinnati.

“Anything can happen. We know they have good pitching,” Ruiz said. “We have to take advantage of mistakes and try to score some runs for our guys.”