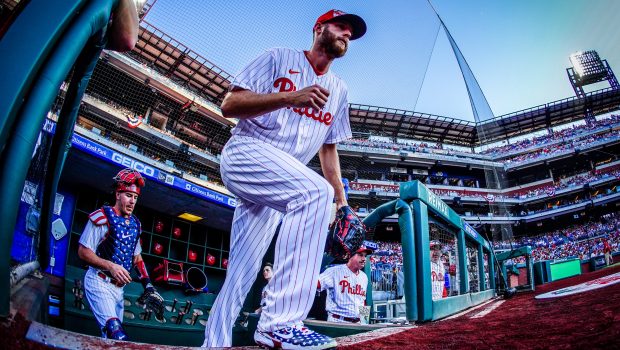 The Phillies have an extra day to savor the fact that they are now just 1 1/2-games behind the Cards in the chase for the last wild card playoff spot.

Zack Wheeler saw to that last night with seven shutout innings of four-hit ball and Rhys Hoskins and J.T. Realmuto slugged home runs as the Phillies beat the Cardinals 4-0.

The Phillies won two of three games in the series against a team they are chasing for a National League wild-card spot.

“A series win is always a plus,” Wheeler said. “Hopefully, we can continue this and keep it up.”

Since Rob Thomson took over as interim manager following the firing of Joe Girardi on June 3, the Phils have gone 20-9.

The Phils and Cards will meet next weekend in St. Louis for a four-game series.

“We haven’t played a lot of the Central, but to come away with a series win now and a series win over the Brewers (in early June in Milwaukee) is a good measuring stick of where we are against the National League,” Hoskins said.

“It’s big. We see them again in a week and it will be another big test for us. So we’ll see where it goes.”

Wheeler scattered four singles through seven innings while striking out five and walking one in improving to 7-4 with a 2.66 ERA. It is the third time this season that Wheeler has been a part of a combined shutout, which was finished off by relievers Nick Nelson and Corey Knebel.

Cardinals manager Oliver Marmol said: “He was just overpowering with his stuff.”

Hoskins continued his torrid stretch since June 8. In the last 25 games, the first baseman has a .341 average with nine homers, 17 RBI, and 18 runs scored. That includes four homers in his last five games after breaking the scoring ice in the bottom of the fourth with a solo homer on a cutter by Adam Wainwright that hung over the middle of the plate.

In his career against Wainwright, Hoskins is now 6 for 10 (.600) with three homers and three RBI.

“Everybody has those guys who they see well,” Hoskins said. “He does a great job of mixing pitches. But yeah, I see him well.”

In the sixth, Hoskins doubled off the center-field wall to start the inning and scored on a Nick Castellanos single up the middle. Two hitters later, Realmuto plated Castellanos with his sixth homer of the season.

Both Hoskins and Realmuto went 2 for 4 — the only hitters for either team with multiple hits. Both are seen as critical offensive pieces if Philadelphia is going to weather the storm caused by Bryce Harper’s broken thumb for the next six-plus week.

“We’ve talked about how you can’t replace a player of his caliber,” Hoskins said. “You shouldn’t really try, there’s a few of them in the whole world. But you have to be focused on being the best that you can and we have some good players in here. We’re better when he’s in the lineup, but we have a lot of good hitters around here.”

Wainwright (6-6) allowed four runs on eight hits in 5 2/3 innings, striking out five and walking one.

“I didn’t think he was wearing down,” Marmol said. “His cutter didn’t play today, so he was pitching off the sinker. He used his fastball accordingly with a couple change-ups. Usually, the cutter makes an effective weapon. But he battled through that.”