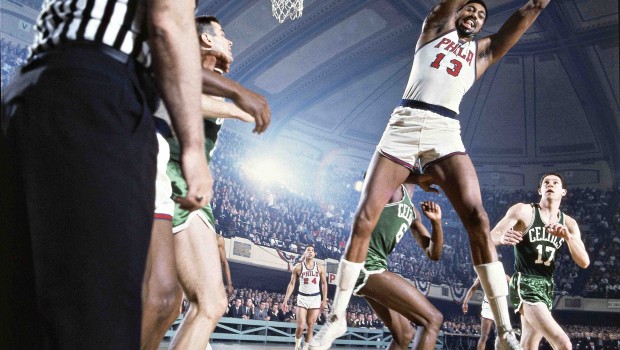 PHILLY’S WILT IS 2ND-GREATEST, BEHIND BRON, AHEAD OF MJ!

We all know that Bill Russell is the greatest winner in sports history. Eleven championships in 13 seasons shuts down every argument. Russell’s Celtics routinely beat Wilt’s Warriors/Sixers/Lakers in the playoffs. But Russell had a lot more help than Wilt had. And no one could match Wilt’s physicality (7 feet 1 inch, 275 pounds) and skill set.

Chamberlain forever will be the most dominant player in the history of the sport. He still holds 72 NBA records. He won seven consecutive scoring titles and averaged 22.9 rebounds per game over 14 seasons (yes, it was a different game with a lot more missed shots). He almost never came out of a game, leading the league in minutes eight times. He averaged 50.4 points per game for the 1961-62 season. Think about that for a second: that means that if you score “only” 30 on a given night, you need 70 the next game to maintain your average. When Wilt decided to become a passer, he led the NBA in total assists in 1967-68.

Wilt forced rule changes. The paint (we called it “the key”) was widened because of Wilt. Offensive goaltending was invented by Wilt and banned by the NBA. When Wilt routinely dunked his free throws in high school, the practice was outlawed with a new regulation enforcing the free throw “plane.’’

I recall having this “greatest player ever” discussion with Larry Bird when Larry was in the middle of his three straight MVP seasons in the mid-1980s.