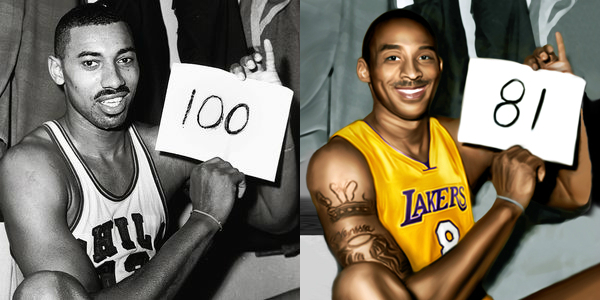 PHILLY’S WILT AND KOBE AT THE TOP: CHECK OUT BRYANT’S 81-POINTER!

When the Philadelphia Warriors’ Wilt Chamberlain scored 100 points against the New York Knicks on March 2, 1962, the NBA world knew it would never see anything like it again.

The fact that there were no television cameras to capture the event only added to the legend of the performance.

Since that game, the 70-point margin had been crossed six times and just twice since 1963, but that was as far as it went. It seemed David Robinson’s 71-point game in 1994 against the Clippers was as high as anyone would ever reach again.

That was until Kobe Bryant burned the Toronto Raptors on January 22, 2006 in one of the greatest single-game performances in NBA history. As the Lakers scored a 122-104 comeback victory at home, Bryant finished with 81 points on 28-of-46 shooting, including 7-of-13 from 3-point range, and 18-of-20 from the foul line. The accomplishment stunned even Bryant himself: