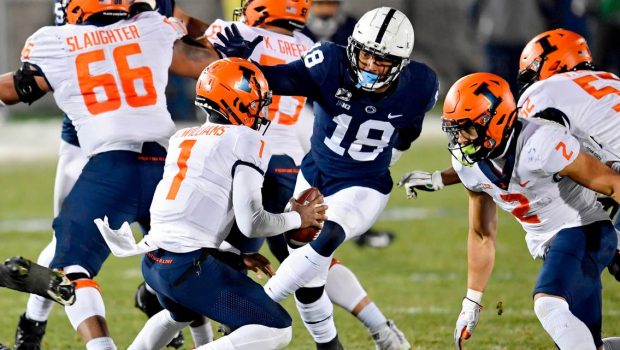 Shaka Toney came to Penn State from Philly’s Imhotep Charter School as an undersized defensive end who didn’t have the strength to hold up in the Big Ten.

Today, he is 6-3 and 252 pounds and two nights away from becoming a legitimate NFL prospect as an Edge.

The former Nittany Lion has been competing with athletic freaks for the entirety of his Penn State career, so it’s no surprise that he took a back seat to the show Micah Parsons and Jayson Oweh put on at the team’s pro day in March.

Parsons and Oweh both ran faster in the 4.3s for their 40-yard dash and were the talk of the workouts.

At his Pro Day, Toney got off the blocks quickly, posting a 4.51 40-yard dash, good for second among all defensive ends. He trailed only his Nittany Lion counterpart Oweh’s 4.37 marker.

Strictly a defensive end in his four years on the field for the Nittany Lions, Toney may project more as an outside linebacker to pro scouts and general managers.

With build — especially arm length — being a major area of importance for defensive ends in the modern NFL, Toney’s lack of such would be the reason for a positional switch.

As a speedy defensive lineman, Toney has done a good job of breezing past collegiate offensive lines and getting to the quarterback — collecting five or more sacks in each of the past three seasons.