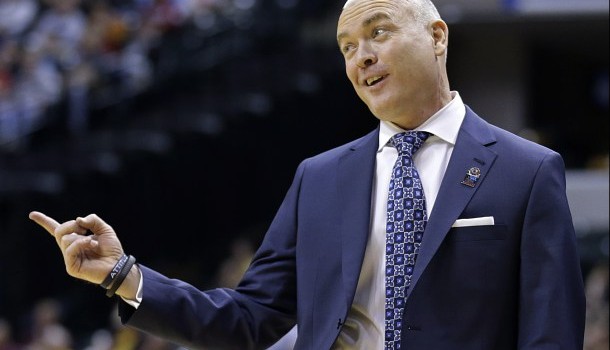 Iowa State guard Rasir Bolton has said he transferred from Penn State last summer because Chambers told him he had a “noose” around his neck.

The comment, which Chambers acknowledged and apologized for in a statement yesterday, came a day after the coach served a one-game suspension for shoving Penn State’s Myles Dread during a conference game against Michigan in the 2018-19 season.

Bolton, who said the coach’s past behaviors had convinced him that the “noose” comment wasn’t a “slip of the tongue,” also said Chambers called his parents “well-spoken” and “organized.” He said he viewed the latter comments as insults steeped in stereotypes about the intellect and educational backgrounds of African Americans.

“A ‘noose’ around my neck is why I left Penn State,” Bolton tweeted, in part. “Head Coach Patrick Chambers, the day after his one-game suspension in January 2019, in talking to me referenced a ‘noose’ around my neck. A noose: symbolic of lynching, slavery and racial terrorism. Due to other interactions with [Chambers], I knew this was no slip of the tongue. I reported this immediately to my academic advisor. I confronted Coach Chambers. I spoke directly with the [athletic director’s] office myself.”

Chambers apologized to Bolton and his family yesterday. Bolton’s parents had met with Chambers and members of the athletic department multiple times but had received only “surface level” responses, per Bolton.

“I’ve realized the pain my words and ignorance caused Rasir Bolton and his family and I apologize to Rasir and the Bolton family for what I said,” Chambers said in a statement. “I failed to comprehend the experiences of others, and the reference I made was hurtful, insensitive and unacceptable. I cannot apologize enough for what I said, and I will carry that forever.”

Bolton did not absolve the university of culpability in his statement. He said Chambers did not apologize when he confronted him. After he contacted the athletic department about the incident, he said, he was referred to a psychologist who tried to help him “deal” with Chambers’ personality type.

Bolton also said he suffered socially because some of his teammates questioned his loyalty to the team.

“Some teammates were told I couldn’t be trusted and I was told the team didn’t trust me, I wasn’t ‘all in’ and ‘loyal,'” Bolton said. “Because I stood up for myself?”

Penn State athletic director Sandy Barbour said her department will implement steps to offer student-athletes more opportunities to express themselves in the future. Those steps, per the school’s statement, include the creation of an “Intercollegiate Athletics Response Team” and a survey to “offer an opportunity for the Intercollegiate Athletics community to provide feedback on the culture, climate and experience as it pertains to diversity, inclusion, respect and acceptance.”

“Patrick Chambers deeply regrets the words he chose and understands the pain he caused Rasir Bolton and his family,” Barbour said in a statement. “Patrick has stated that he is committed to educating himself and he is actively working to learn and grow, which will be imperative to his future success at Penn State.” She added: “Our black community of students, faculty and staff must have the opportunity to feel safe, respected and welcome at Penn State, and clearly our past actions and words have not always contributed positively to that goal. It is our obligation to embrace all in our community regardless of differences — the color of their skin, their ethnicity, sexual orientation, religion, disability or gender should not matter.

“Our community of student-athletes, staff and coaches is stronger because of the diverse backgrounds, experiences and perspectives they all bring to our competitive venues and classrooms. As leaders, our coaches must model the values of our institution and I remain steadfast in continuing to strengthen the culture of acceptance within our Penn State Athletics Department.”

Chambers has had an eventful experience at Penn State. His team was set to participate in its first NCAA tournament last season before COVID-19 canceled the event after a 21-10 campaign. After a 15-18 season in 2016-17, Barbour gave Chambers a public vote of confidence amid buzz about his future with the school.

Bolton, who averaged 14.7 PPG last season at Iowa State, said he discussed his experience at Penn State to help others in the future. The junior guard, who was granted a waiver to play immediately after transferring from Penn State, said college athletes need more support.

“I wasn’t the first and I know I wasn’t the last,” Bolton said. “Everyone’s position to speak out isn’t the same, so I am only speaking for myself. There is a serious need for change in the way players are protected and helped across the country when faced with these situations. Surface level resources are not good enough. In most cases, it is the [c]oach who is protected, while the player is left to deal with [it] or leave. BE the change you want to see.”