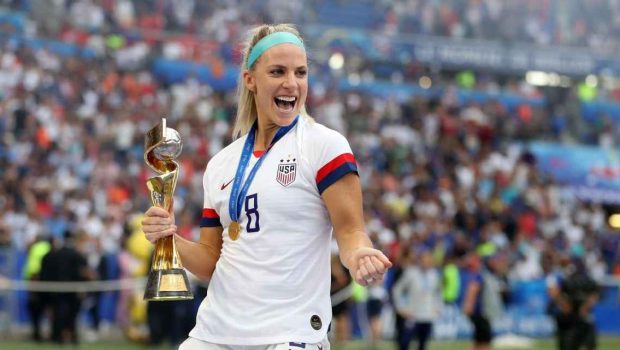 Ertz, 27, claimed the honor for the second time in her career, earning 42% of the vote to beat out fellow nominees Rose Lavelle, Carli Lloyd, Alex Morgan, Alyssa Naeher and FIFA World Player of the Year Megan Rapinoe.

While Ertz is the 10th player in the award’s history to win multiple times, she is the first to do so while also having won U.S. Soccer Young Female Player of the Year, which she claimed in 2012 after leading the U.S. U-20 team to the World Cup title that year.

She has also won two World Cup titles at senior level, the latest of which came last summer in France, where her displays in a holding midfield role saw her contribute to both attack and defense. Her efforts on the defensive side of the ball helped the U.S. concede just three goals over the course of the tournament. She was often relied on to help the U.S. transition from defense to attack, and she scored in the 3-0 group-stage defeat of Chile. Overall, she logged 474 minutes in six appearances during the World Cup.

“It’s been a whirlwind of a year and one that I’m extremely grateful for,” Ertz said. “My team lifted me up in so many ways and our experiences on and off the field in 2019 just encapsulate the love I have for the national team and for wearing this crest and what it represents.”

In 2019, Ertz started a team-high 22 games for the U.S., and her 1,755 minutes played were third-most on the team. She finished the year with 95 career caps, and she was recently named to the FIFA FIFPRO World XI.

“All of my teammates just had such an amazing year and we all know it takes an entire team to win a World Cup or have a successful club season,” Ertz added. “We are all a sum of the people around us, so I want to especially thank [my husband] Zach and my family, all my coaches for the national team and the Red Stars, and all my teammates for their never-ending support. It’s emotional to be recognized in this way and it’s a cherry on top of a beautiful 2019. It’s incredible.”

U.S. Soccer Female Athlete of the Year has been awarded since 1985, when midfielder Sharon Remer earned the inaugural honor. Abby Wambach won it six times, the most of any player.