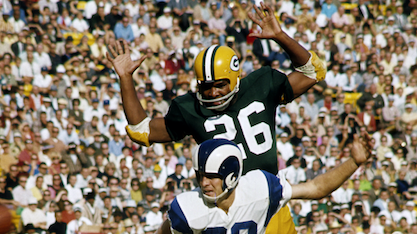 Adderley covering ex-Eagles star Tommy McDonald, then with the L. A. Rams.

Herb Adderley died yesterday at age 81, and history will record that he was one of the NFL’s all-time great cornerbacks.

He was first-team All-Pro five times in his nine seasons with the Packers and also was a member of the NFL’s 1960s all-decade team. He played on all five of Vince Lombardi’s championship teams and was a key member of the outstanding defenses that were the strength of the final three of those title winners (1965-67).

“(Adderley) was the best I played with,” said former Packers linebacker Dave Robinson, a fellow Hall of Famer who joined the team in ’63. “I played with a lot of guys.”

Adderley was born June 8, 1939, in Philly and was a football, basketball and baseball star at Northeast High School, and played college football at Michigan State from 1958-60.

Lombardi drafted Adderley with a first-round draft pick in 1961 as a halfback coming out of Michigan State, though in that era of single-platoon football in college Adderley also had played defensive back.

Late in Adderley’s rookie season, an injury sidelined starting cornerback Hank Gremminger, and at halftime Lombardi unexpectedly chose Adderley to replace him in the second half of that Thanksgiving Day game against Detroit.

Adderley hadn’t practiced at cornerback with the Packers but responded with an interception. He’d found the position he was made for in the NFL.

Over his 12-year career – he also played three seasons with the Dallas Cowboys – Adderley intercepted 48 passes, which ranked 13th in league history when he retired after the 1972 season. His 39 interceptions with the Packers ranks No. 3 on the team’s all-time list, behind only Bobby Dillon (52) and Willie Wood (48). And his seven returns for touchdowns ranks second on the team’s all-time list, behind only Charles Woodson (nine).

“Our thoughts and prayers are with Herb’s wife, Brenda, and their entire family. We will forever keep his legacy alive to serve as inspiration for future generations. The Hall of Fame flag will be flown at half-staff in Herb’s memory.”

Adderley’s most famous play was his 60-yard interception return for a touchdown against Oakland in the fourth quarter of Super Bowl II that removed all doubt of the outcome in the Packers’ 33-14 win.

Adderley also was a kickoff returner for his first eight seasons with the Packers and averaged 25.7 yards on 120 returns in his career. Two of those were for touchdowns, including a 103-yarder in 1962.

Adderley was voted into the Hall of Fame in 1980. As much as anything, his play at cornerback was marked by a fluid athleticism.

“To watch (Adderley) up close, unforgettable,” said Pat Toomay, a defensive lineman who was a Cowboys teammate for Adderley’s final two seasons in the NFL. “Never have I seen such grace. And he could just hang, hang, hang. It was like he was in slow motion. He’d go up and up and up, and hang and hang and hang, and then bat down the ball or pick it.”

The Packers traded Adderley to the Cowboys in 1970 and he played in two more Super Bowls – the Cowboys lost to Baltimore in Super Bowl V, then beat Miami in Super Bowl VI. But he chafed at the Cowboys’ segregated locker room and clashed with coach Tom Landry, whose rigid defensive system didn’t allow for the freedom he’d had under Lombardi to play instinctively. Landry eventually benched Adderley about halfway through the cornerback’s final season.

“Tom Landry and (general manager) Tex Schramm knew what was going on in Dallas and were a part of it for not stopping it,” Adderley said in “Lombardi’s Left Side,” a book he co-authored with Robinson. “The two of them made the decision to keep a less-talented white player and cut the more-talented black player. … This stuff was the exact opposite of Lombardi’s policy of putting the best players on the field and not judging anyone by the color of their skin.”