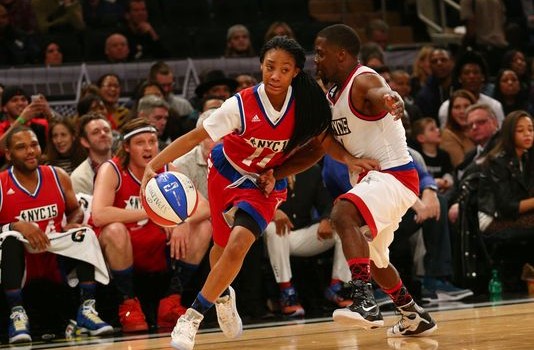 PHILLY’S MO’NE DAVIS HAS HAD A WILD AND CRAZY RIDE!

Philly 13-year-old has had quite a ride.

After pitching our own Taney Dragons into the 2014 Little League World Series Final Four, she has become the toast of the sports world.

The eighth-grader has already met President Barack Obama and Michelle Obama, had her face on the cover of Sports Illustrated and had NBA stars such as Stephen Curry seek her autograph. One part that still mystifies her is that “people in the hallways at school who I don’t even know say hi to me.

“The last seven months of my life have been pretty crazy, pretty wild and a little overwhelming,” said Davis, who was interviewed by USA Today while was in Washington as a panelist at The Aspen Institute’s Project Play meeting Wednesday.

“Before (the Little League World Series), I was still pretty busy, playing three sports,” added Davis, dressed casually in a black shirt and jeans. “But my life was not as busy with traveling and things like that.”

So what’s next on the horizon for the 13-year-old?

Fresh off her appearance in the celebrity NBA All-Star game in New York (photo above), in which she received even more attention for schooling “Wedding Ringer” actor Kevin Hart, Davis continues to play sports year-round, be it baseball, basketball or soccer.

The Philly native is in middle school but plays on the high school varsity basketball team at Springside Chestnut Hill Academy as a 5-foot-4 guard.

Davis has made some time to catch some college women’s basketball games this season. Although she had said publicly that she dreamed to play for UConn, she said is also looking at other programs such as Stanford these days.

“Someone told me to keep my options open so I’m doing that,” Davis said.

Davis has raised the spotlight not only on herself but on women in sports in general. And for all the good Davis has brought for women, some hope that attention on her will generate more of a shine on women’s sports in general — not just for women who compete against men.

“If people are really overwhelmed by what a great athlete Mo’ne is, and she is a great athlete, they are not seeing the many women out there who are also great athletes,” said Nancy Hogshead-Makar, an Olympic gold medalist swimmer and women’s sports advocate as CEO of Champion Women.

“Billie Jean King burst out of her place when she beat Bobby Riggs but she was playing just as exceptionally when she played against women. What Mo’ne did was truly extraordinary, but it’s important to recognize that women are not only valuable when they play in a men’s league.”