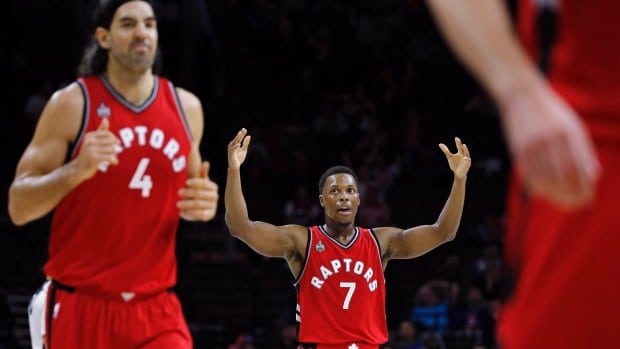 It was a great night for Philly basketball, but a lousy night for the Sixers.

Former Villanova star Kyle Lowry scored 23 points and Luis Scola had 21 to help the Toronto Raptors snap a three-game losing streak with a 119-103 victory over the winless Sixers Wednesday night at the Wells.

One year after starting 0-17, the Sixers have lost their first eight games of this season.

“You just can’t get into a pity party,” coach Brett Brown said. “You have to deal with it and try to figure out ways to try and steal a win.”

The Sixers have a difficult upcoming stretch, with games ahead against Oklahoma City, San Antonio and Dallas.

Lowry, who played two seasons at Villanova, heard polite applause during pregame introductions and gave hometown fans plenty of reason to cheer. He scored 14 points in the first half, capped by a 27-footer with 0.9 seconds left to send the Raptors into halftime with a 63-57 lead.

“I always think every time I shoot it it’s going in,” Lowry said.

Lowry left about 65 tickets for friends and family and was sleeping in his own bed Wednesday night before meeting up later with the Raptors.

The Raptors built a 20-point lead in the third and left no doubt about the outcome.

Scola scored 17 points on 8-for-10 shooting in the third quarter and helped Toronto become the latest team to punish the Sixers.

The Sixers started marginal NBA players JaKarr Sampson, Nik Stauskas and T.J. McConnell. Stauskas, a noted 3-point shooter at Michigan, has struggled from the arc in the NBA. He missed of 5 of 7 against the Raptors and entered only shooting 29 percent overall on 3s.

Jahlil Okafor led the Sixers with 26 points and had seven rebounds. McConnell had 13 assists and Jerami Grant had 12 points and 10 rebounds.