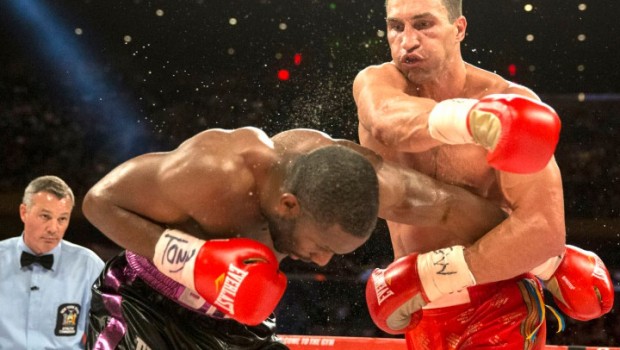 PHILLY’S JENNINGS TAKE IT ON THE CHIN, LOSING TO CHAMP KLITSCHKO

There was a time when boxing was a huge sport, followed by the masses.

Alas, now it has taken a back seat to MMA and UFC and whatever else comes down the pike that appeals to young people.

And there was a time when Madison Square Garden was the world’s big top of boxing. That is also a thing of the past, thanks to the great sums the hotels in Las Vegas and HBO and Showtime can dole out.

But there is still nothing like a heavyweight championship fight to get the juices flowing in the Big Apple.

And Wladimir Klitschko reminded America why he is the most dominant heavyweight on the planet Saturday night, using his size and long jab to capture a unanimous decision over Philly’s Bryant Jennings.

No, Klitschko won’t make us forget about Mike Tyson, Evander Holyfield or even Lennox Lewis. But the Ukrainian still has too much size and power for any of the contenders of his era. Jennings was never down and did his best. But the Philly native never really threatened the champion. Two judges scored it 116-111, while the third judge saw it 118-109.

“I thought the margin should have been closer,” Jennings said. “We came to fight. Every time I started working he held me.”

Klitschko landed 92 jabs in the fight, compared with just 16 for Jennings, who landed more power punches 94-52.

“A knockout is the best performance,” Klitschko said. “Jennings was a very good challenger and would have beaten a lot of heavyweights. It was great to come back to Madison Square Garden. I look forward to coming back here.”

Klitschko was fighting in the United States for the first time in seven years. Since then he had spent much of his time filling up soccer stadiums around Europe and running his streak of successful title defenses to 17.

In Jennings, Klitschko was facing someone who started boxing only six years ago and made his pro debut at age 25. While Klitschko was in his 27th title fight, this was the first for Jennings, who was hoping his athleticism and Philly fighting spirit would help him earn the upset victory before a crowd of 17,056.

But like all of Klitschko’s most recent opponents, Jennings had trouble getting inside of the champion’s long left jab. Giving away at least three inches and almost 25 pounds, Jennings couldn’t match Klitschko physically. But the challenger tried to use quick bursts to connect.

The Klitschko jab often followed by a hard right proved difficult for Jennings to counter. Jennings (19-1, 10 KOs) seemed to get frustrated in the fifth round, barking something at Klitschko who offered no reaction. Jennings landed a good left hook early in the sixth round and another hard right later in the round.

It got Klitschko’s attention as the champion came out looking to do damage in the seventh.

Both fighters looked tired after the eighth round. Peeking through his raised gloves, Jennings would lunge at Klitschko trying to land anything that might do some damage.

But whenever he came close, Klitschko would hold and smother him, a tactic the Jennings camp hoped would draw a warning from referee Michael Griffin.

A warning came in the ninth, and in the 10th Griffin did take a point away from Klitschko after a clinch.

Despite the deduction, Jennings was well behind on the cards entering the 11th but he continued to have trouble finding Klitschko’s chin.

He tried to open the 12th with a flurry, but got tangled in Klitschko’s outstretched arms. Overall, it was a good learning experience for Jennings and another successful title defense for Klitschko.

Brooklyn welterweight Sadam Ali improved to 22-0 with a one-sided decision over Francisco Santana of Santana Barbara, Calif. Santana (22-4-1, 11 KOs) tried to apply constant pressure, but Ali was comfortable fighting off his jab while backing up.

Two judges scored it 97-93, while the third judge had Ali winning all 10 rounds. Ali, a former Olympian, connected frequently with quick shots to the head and body before escaping Santana’s constant come forward attack. It was a solid showing for Ali, who opened the televised card.

“I’m thrilled with my victory,” Ali said. “It’s a dream come true to fight in Madison Square Garden. I can’t wait to do it again. He was a strong fighter. He hits very hard and I was able to take his punches. It was a good learning experience for me.”

0 thoughts on “PHILLY’S JENNINGS TAKE IT ON THE CHIN, LOSING TO CHAMP KLITSCHKO”