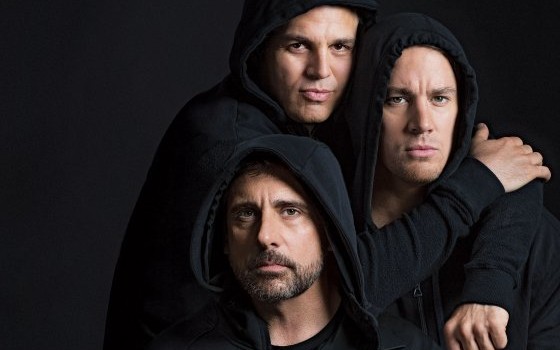 PHILLY FANS SHOULD ROOT FOR ‘FOXCATCHER’ TO GET AN OSCAR

It is only January 2 and already Philly’s teams are in the toilet.

The Eagles’ 10-6 season is a thing of the past and supposed experts like the Daily News’ Skippy Donnellon are speculating that coach Chip Kelly will cower in the face of pencil-necked geek GM Howie Roseman and take any college job he can find.

The Flyers are a joke, which of course has never been declared by the local media butt boys; the Sixers are in the tank and the Phillies — well enough said about them.

So who do we have to root for?

How about “Foxcatcher,” the movie made of the tragic murder of a wrestler by John E. du Pont, of the Delaware du Ponts, which, among other things forced Villanova to take the family name off the building that is now called the Pavilion.

It is rare that a sports film ends without some spiritual uplift, even when it ends in a loss. Rocky Balboa fought gloriously and proved he was not a bum in “Rocky.”

The same might be said of “Foxcatcher,” the latest sports-theme movie to find itself in the Academy Award discussions, with nominations due on January 15. It is reminiscent of “Raging Bull.” By being so dark, they offer no inspiration and challenge the genre’s convention; unless despicable behavior elicits goose bumps for you, these films will not produce any.

They are intense stories about irredeemable central characters: LaMotta, the middleweight boxer of the 1940s and 1950s, who alienates everyone close to him, and the creepy wrestling benefactor John E. du Pont, who shot and killed the 1984 Olympic gold medalist Dave Schultz in 1996.

However, there is a fly in this ointment. Mark Schultz, who wrote the book from which the movie has been drawn, has a problem with the director, Bennett Miller:

“The personalities and relationships between the characters in the film are primarily fiction and somewhat insulting. Leaving the audience with a feeling that somehow there could have been a sexual relationship between duPont and I is a sickening and insulting lie.”

“I told Bennett Miller to cut that scene out and he said it was to give the audience the feeling that duPont was encroaching on your privacy and personal space. I wasn’t explicit so I didn’t have a problem with it. Then after reading 3 or 4 reviews interpreting it sexually, and jeopardizing my legacy, they need to have a press conference to clear the air, or I will.”

“Raging Bull” is the better film and, in my view, the greatest sports movie of all time because its director, Martin Scorsese, and its star, Robert De Niro, were so adept at conveying a world of violence and amoral men. Four years earlier, they had collaborated on “Taxi Driver.”

“Foxcatcher,” directed by Bennett Miller, leaves you cold with Steve Carell’s portrayal of du Pont’s psychopathology. Du Pont is a masterful manipulator with money who creates a training center for Olympic wrestlers, but is, in truth, an awkward loser trying to create a world of personal achievement that will set him apart from his distant mother.

Filmmakers always face a distinct challenge in creating movies about sports, which have their own real-time clock and inherent drama and, to some extent, have been seen by many people. Fans watch sports hoping for buzzer-beaters and game-winning touchdown passes with the time ticking to zero. I want sports films to create an alternative universe, one in which a sports story is told not through a nine-inning game but as a love story, or a fantasy, or even a prison tale.

For instance, “Moneyball,” Miller’s previous film, created a world of conflict within baseball: the rise of analytics against the pessimism of old-school scouts. It was compelling enough on its own that it limited the need for much baseball action. Oakland A’s General Manager Billy Beane, played by Brad Pitt, was quixotic enough that his own Sancho Panza, a stats wiz played by Jonah Hill, felt organic.

If fictionalized or fictional stories, like “A League of Their Own” or “Field of Dreams,” relieve filmmakers of the need to hew to facts, I look forward to seeing how they will handle stories about newsmakers like Oscar Pistorius, Donald Sterling, Ray Rice and, maybe, Mo’ne Davis.