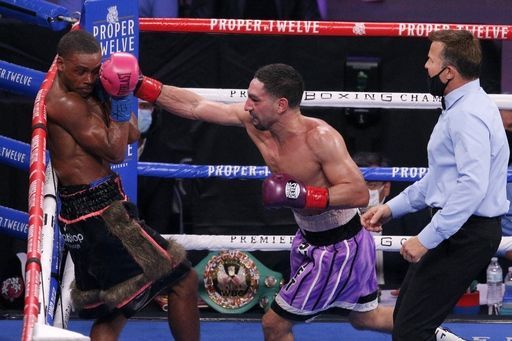 Errol Spence Jr. skipped a tune-up in his first fight since a car crash that almost derailed his promising career.

Spence defended his WBC and IBF welterweight championships, looking sharp in a unanimous decision over Danny Garcia by controlling the pace almost from the start in another defense on his home turf.

Spence (27-0, 21 knockouts) went the distance for the third straight time to beat Garcia (36-3, 21 knockouts). Garcia’s three losses have come in his last six fights. The Philly fighter was in his first title bout in two years.

”He was the better man tonight,” Garcia said. ”No excuses. I fought a hard and tough fight. He had a good jab and that was the key to the fight. He was also a bit busier than me.”

Judges Steve Weisfeld and Barry Lindenman scored it 116-112, with Tim Cheatham giving Spence a decided 117-111 edge at the home of the Dallas Cowboys, the NFL team that has adopted the 2012 U.S. Olympian and rising star.

Spence’s third defense in his hometown came 14 months after a high-speed crash near downtown Dallas.

”All training camp I felt good,” Spence said. ”I told people I didn’t want a tune-up fight. I proved to everyone that I’m the best 147-pound fighter in the world.”

Spence flipped his Ferrari and was ejected but escaped without serious injuries while getting charged with drunken driving in October 2019. That was about a month after a thrilling split-decision victory over Shawn Porter in Los Angeles that added the WBC belt to his IBF strap.