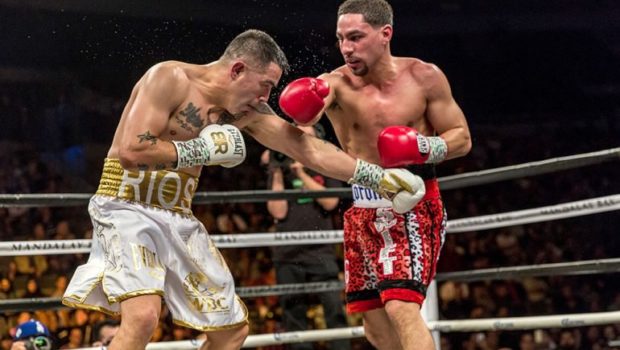 PHILLY’S DANNY GARCIA IS BACK WITH A BLAST! THURMAN REMATCH NEXT?

Philly’s Danny Garcia is back!

In his first fight since narrowly losing a welterweight title unification bout last March, Garcia (34-1, 20 KOs) re-established himself among elite 147-pounders by knocking out a game Brandon Rios with one right hand in Round 9 of their Premier Boxing Champions bout at the Mandalay Bay in Las Vegas.

“I felt the ring rust a little bit in the beginning. I wasn’t as sharp as I wanted to be,” Garcia said. “He’s a good inside fighter and he was giving me some good inside cuts. It was a good nine rounds. He came to fight but I was prepared for it. I came to box, and I did that. I came to bang, and I gave the fans what they wanted with a knockout.”

Garcia, 29, who lost by split decision to Keith Thurman nearly 12 months ago, followed up on a jab with a perfect counter right that savagely turned Rios’ chin and set him sprawled out on his back. Although Rios was able to make his feet, referee Kenny Bayless took his time and ordered Rios to walk forward before waving off the fight at 2:25 of Round 9.

“I noticed that when I was getting my punches off, he was standing in front of me and I just let it go,” Garcia said. “I couldn’t get him out early because I was giving him the benefit of the doubt by letting him come forward. As soon as I got the fight in the middle of the ring like I wanted in the later rounds, I took it to the middle and landed a good shot.”

Rios, 31, returned to the ring last June after a 2015 stoppage loss to Timothy Bradley Jr. sent him into retirement. But reunited with trainer Robert Garcia following a one-fight departure, Rios was in visibly better shape and looked like his prime form of old as a former lightweight titleholder by mixing up his offense and crowding Garcia.

After the fight, Garcia’s interview was interrupted in the ring by former welterweight titleholder Shawn Porter, which set off a profanity laced argument that ended with both fighters being separated.

“You want some work too?” Garcia yelled in Porter’s face. “I’ll come spar your ass and beat your ass for free. We can take it in the street if you want to.”

Garcia then turned his attention to Thurman, who seated at ringside. Thurman (28-0, 22 KOs), who owns a pair of welterweight titles, is fresh off of elbow surgery and after an upcoming spring comeback fight has shown interest in rematching Garcia later this year.

“No doubt, I would love the rematch with Keith Thurman,” Garcia said. “But it’s on him. Whenever he is ready, we can fight. I took the loss like a true champion and I bounced back like a true champ.”