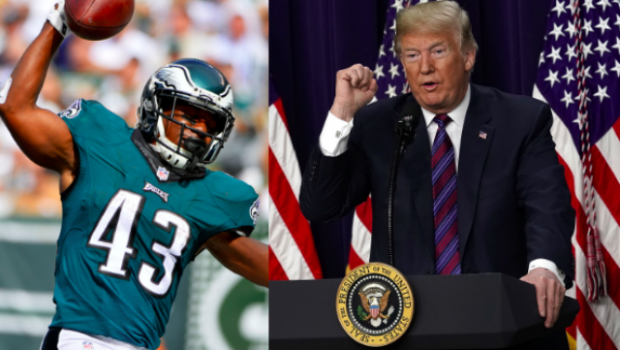 PHILLY VOTERS GOT REVENGE ON TRUMP FOR DISSING SUPE EAGLES!

Philly’s sports fans have an incredible passion and a long memory.

If you doubt that, ask any geezer about the 1964 Phillies and Chico Ruiz’s steal of home that started their demise.

And Eagles fans take everything personally.

In that regard, they are similar to President Trump, who disinvited the Super Bowl champ Eagles from visiting the White House in June 2018.

After reports indicated less than 10 players planned to attend the traditional White House visit, Trump released a statement disinviting the entire team over the national anthem protests. While that didn’t seem to be the case on the players’ end, Trump named dropped the military and shamed the players.

“The Philadelphia Eagles are unable to come to the White House with their full team to be celebrated tomorrow,” the statement reads.

“They disagree with their President because he insists that they proudly stand for the National Anthem, hand on heart, in honor of the great men and women of our military and the people of our country. The Eagles wanted to send a smaller delegation, but the 1,000 fans planning to attend the event deserve better.”

And here’s what the New York Times reports:

But ask Philadelphians about when things turned sour with the president, and many will point back more than two years, to his abrupt cancellation of a traditional White House visit for the city’s beloved Eagles football team after its first ever Super Bowl victory in 2018.

In this city with a penchant for deeply held civic grudges, trash talk and impolitic celebrations of its rivals’ travails, where Crisco slathered on telephone poles to prevent climbing is a sign of impending revelry, the blocks around City Hall on Saturday began to resemble the famed Super Bowl parade of 2018.

Chest-pumping pride spilled out, with expressions of enthusiasm for Mr. Biden, the former vice president, often overshadowed by feelings of vengeance toward Mr. Trump.

“Philly knows how to stand up for itself, and love us or hate us, this is what we do right here,” said Rob Cancel, 37, as he joined the celebration outside the city’s convention center on Saturday sporting a red “Bad things happen in Philadelphia” T-shirt. “We come out, we show up and we show them who we are. We’re a strong, strong, proud people.”

Others were more direct.

“I must say, Philly got to tell him he’s fired. Woo!” said Stephanie Marsh, 40, as she skipped down Arch Street toward the convention center.

A widely circulated photograph showed one man holding a sign listing perceived civic adversaries — though it used a different, more profane, word — who had been “defeated by Philadelphia,” including King George III, the former New England Patriots quarterback Tom Brady and Mr. Trump.

Another photo showed a sign held aloft over revelers noting that Mr. Trump had “disinvited the Eagles to the White House.” It added, “So we returned the favor.”

President-elect Joe Biden got 81% of the vote in Philly, and he cleaned up in the collar counties of Bucks, Chester, Delaware and Montgomery.