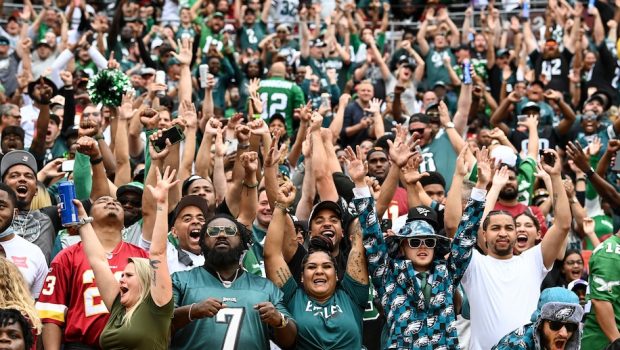 The crowd yesterday at FedEx Field in Maryland for the Eagles-Commanders game had a heavy mix of green to go with the red.

It seemed almost as if there were more Eagles fans as Commies fans.

“He wanted to get out of [Philadelphia]. He was complaining about being an Eagle. Get the frig off then.”

“I’m sober, by the way,” she added, pointing to her can of Liquid Death sparkling water.

Even team-sponsored functions, such as the HBCU tailgate, were inlets of burgundy and gold among a sea of green.

Philadelphia had such a strong presence in part because larger fan experience companies — such as Philly Sports Trips, Phans of Philly and the Green Legion — had bussed in a few thousand fans.

Several said they had paid about $350 for a round-trip bus ticket, lower-bowl seats, an open bar, food and custom T-shirts.