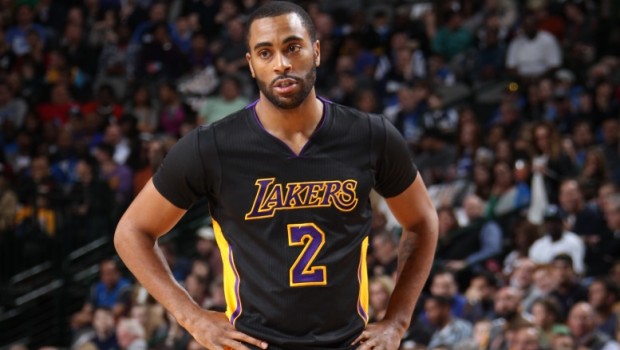 Wayne Ellington’s emotions were a jumble on Monday.

He used to look into the crowd when he played an occasional road game in Philly, and his dad would always be there.

But Wayne Ellington Sr. wasn’t at the Wells Fargo Center Monday night to see his son play for the Lakers against the hometown Sixers.

Ellington Sr. was shot and killed while sitting in a car last November in Germantown. Murder charges were later filed against a 34-year-old parolee who was a suspect in another shooting and a robbery.

The Lakers were barely in town for 24 hours this time, topping it off with a 113-111 overtime victory. Ellington had the winning assist, finding Jordan Clarkson for an easy lay-up through the tangled arms of two Philly defenders with 0.7 seconds to play.

It’s a five-minute drive to Lower Merion High, where Kobe Bryant preceded Ellington on the local courts by a decade.

Ellington spent some time with his grandmother earlier Monday, looking at photos of his father and reminiscing. A few hours later, he was flooded by family and friends, buying about 35 game tickets for them.

One thing he didn’t do was visit his father’s grave.

“I’m not ready for that yet,” he said in a quiet moment. “I’ll do that during the off-season.”

He thought of his father often Monday, especially during the game.

“It still is emotional,” Ellington said. “My pops never missed this game. He was always excited for the 76ers game. It’s been a tough day. But this is a good feeling. I’m glad we got this win like this.”

Ellington has been in and out of the starting lineup, averaging 9.8 points before scoring 20 against the 76ers, making four of six three-point attempts. He will be a free agent in a few months and on his way to another contract with someone who needs outside shooting, if not the Lakers.

He was surrounded by media members after Monday’s game, most of them local.