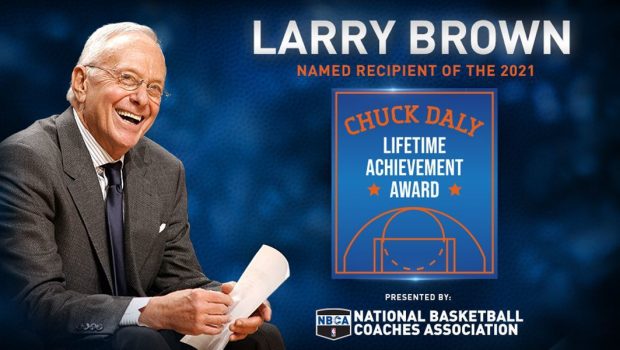 Larry Brown, the only coach to win both an NCAA championship and an NBA title, has been awarded the 2021 Chuck Daly Lifetime Achievement Award by the National Basketball Coaches Association.

Brown coached the Sixers to the 2001 NBA Finals and Daly was Penn’s head coach and then Billy Cunningham’s assistant with the Sixers.

“I admired Chuck,” Brown said on a video conference call. “I think a lot of us that got to coach against him not only admired his ability as a coach, but just the way he carried himself. He made, I think, the coaching profession, in my mind, even more special just because he was such a great guy.

“I tell people all the time, I never worked a day in my life. And just being a coach, I feel so fortunate. But this is an amazing honor, as good as any I have ever had.”

Over the past 50 years, Brown has had 14 stops as a head coach — three as a college coach (UCLA, Kansas, where he won the 1988 national title, and SMU); 10 as an ABA or NBA coach (the Carolina Cougars in the ABA, and the Denver Nuggets, New Jersey Nets, San Antonio Spurs, Los Angeles Clippers, Indiana Pacers, Sixers, Detroit Pistons (where he won the 2004 NBA title), New York Knicks and Charlotte Bobcats. He had a brief stint in Italy with Auxilium Torino in 2018.

“When you receive an award like this, I think that was what Chuck Daly was all about. A coach’s responsibility goes way beyond coaching kids and teaching kids. The relationships you establish are pretty incredible. When you talk about competing, I’m pretty competitive, but games really worried me. I always was concerned whether we prepared our team to meet any challenge. But I loved practice. I think that word practice might have a lot of people confused right now, but I enjoyed that the most. And that’s why I’m so excited to get back into doing this and share the things I was taught.”