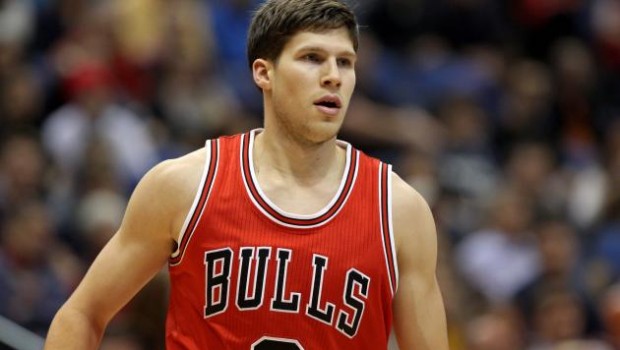 ‘EXPERTS’ WANTED SIXERS TO DRAFT MC BUCKETS, A BUST AS A BULL

Remember all those “experts” on basketball in Philly who last spring were singing the praises of Creighton’s Doug McDermott, and then scorching the Sixers for not taking McBuckets instead of Joel Embiid?

You know who they are:

They were mesmerized by McBuckets’ shooting ability, especially how he had buried 3-pointer after 3-pointer against Villanova in two runaway wins.

Well, the Sixers passed and the Chicago Bulls didn’t.

How is that working out, McBuckets?

He is averaging 3 points per game, and is an end-of-the-bencher on Tom Thibodeau’s Bulls.

The coach values defense above all else, and McBuckets plays none.

The gap between college basketball and the NBA actually is quantifiable. It measures 80 inches and about 225 pounds.

McDermott dominated at Creighton, a first-team All-American who led the nation in scoring (26.7 points per game) as a senior.

Now, as a rookie with the Bulls, he plays only in practice.

There are extenuating circumstances, of course. Wear and tear on McDermott’s right knee required arthroscopic surgery Dec. 13. But he had fallen out of the rotation before the procedure, and he has played just two minutes since being activated Jan. 19.

“It has been tough,” McDermott said before the Bulls practiced before playing the Milwaukee Bucks in the NBA playoffs tomorrow.

“It stunk that I had the injury because I felt I was starting to come along, getting used to the travel and how little you practice because there are so many dang games. I have a lot more respect for some of these (NBA) guys than when you’re on the outside, looking in. It’s impressive, man. It’s crazy.”

McDermott’s “Welcome to the NBA” moment came against the Nuggets in the fourth game of the season. Whenever the taller Danilo Gallinari or high-flying Wilson Chandler checked into the game, they immediately posted him up to draw a foul on the rookie.

McDermott also is expected to guard perimeter players, something he never did playing power forward at Creighton.

“I wasn’t asked to defend a lot because often they wanted me out of foul trouble,” he said. “So I was told to be a little laid-back on the defensive end. But you have to guard on the NBA level; everyone is good. You’re not able to sag off too many guys. They can all shoot, they can all dribble, they’re all athletic. I am still learning.”

Indeed, coach Tom Thibodeau labeled McDermott’s defense “a work in progress” and said he is “a much better shooter than what he has shown.”

“He’s a great shooter and has a lot of confidence about his game,” Derrick Rose said. “I love the way he is handling himself, working very hard to get back on the court. It’s all a matter of time.”

McDermott said he’s learning the importance of help defense and positioning while watching games from the bench.

Thibodeau said the team will evaluate the situation during next weekend’s All-Star break and decide whether to send McDermott to the D-league for more minutes.

“We’ll look at all the options, but the big thing with a rookie is, you still want to have your hands on him here,” he said.

What helps McDermott is commiserating with his father, Greg, whose Creighton team endured a nine-game losing streak.

“We’re in it together,” Doug said.

But, hey, Creighton took down Xavier on the road Wednesday in overtime, and McDermott is also optimistic about his situation.