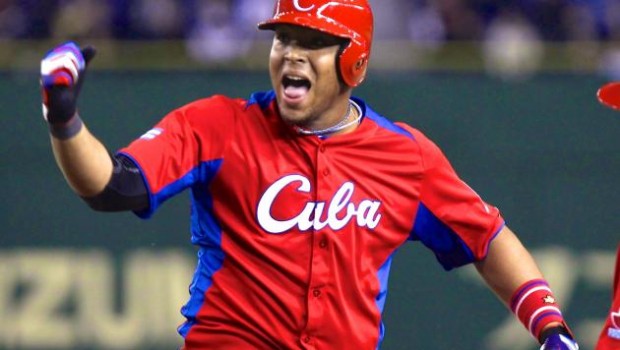 While all around them, the Phillies former peers in baseball’s elite are making moves, hiring new presidents and GMs (Dodgers), about to sign free agents (Red Sox), the Phils have done precious little.

Sure, Ruben Amaro Jr., their feckless general manager, has the devil-may- care demeanor of the captain of the Titanic, but he did publish a new manual — Phillies Way — for not only what it means to be a Phillie, but the values the organization wants to be identified by moving into this perceived next era.

Signing Cuban free agent outfielder Yasmany Tomas was supposed to juice the base and show Phillies Nation that there will actually be something to turn out for in the years to come.

But now Paul Hagan of MLB.com, has crashed that happiness market:

The Phillies, once considered favorites to land free agent outfielder Yasmany Tomas, have cooled on the idea of signing the 23-year-old Cuban defector, according to major league sources.

While the Phils, who had a private workout with Tomas, still like his bat there are concerns about his defense. They now view him as more of a designated hitter-type player, the sources added.

Of course, that thinking could change if the price for Tomas, once estimated to be as high as $100 million, begins to come down. The Phillies are trying to trade right fielder Marlon Byrd with an eye toward moving Domonic Brown from left to right. That would mean they would need to fill the vacancy in left internally (Grady Sizemore, Darin Ruf, Aaron Altherr) or from outside the organization.

Meanwhile, the primary offseason goal is to add at least two starting pitchers to a rotation that currently features left-handers Cole Hamels and Cliff Lee – their 2014 Opening Day starter who is a question after missing the final two months of the season with a flexor pronator strain.