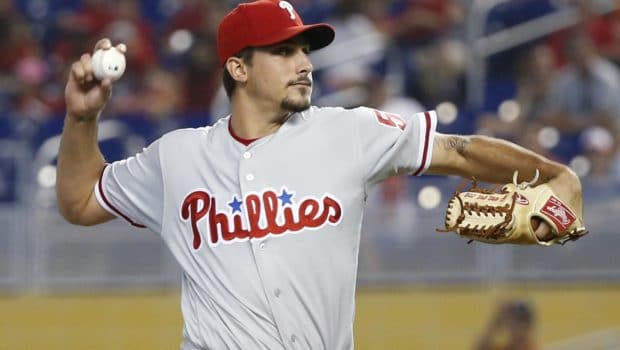 Zach Eflin made his 2017 Phillies debut a success in a 6-2 victory in 10 innings over the Mets at Citi Field.

Eflin had chronic knee pain for the past 10-12 years before he had surgeries last year to repair the patellar tendons in his left and right knees. He was behind other starters in spring training, but got the first call to the big leagues.

“It’s really unbelievable,” Eflin said about his recovery. “Obviously, I wanted to be here more than anything. I got that opportunity.”

Eflin had trouble throwing strikes in the first inning. He walked Michael Conforto to start the inning, and walked Yoenis Cespedes with one out. Jay Bruce followed with a single to score Conforto and put Cespedes at third.

Eflin threw a wild pitch that scored Cespedes to make it 2-0. He later walked Lucas Duda, but avoided further damage.

“Three walks were unacceptable in my work, especially in one inning,” Eflin said. “I don’t really have a word for that. I was able to bounce back. I was able to stick to my strength and locate my heater and keep them off balance. I really just kept going with that.”

It will be interesting to see how Eflin progresses in his upcoming starts, and if he can establish himself as a future piece in the Phillies’ rotation. Eflin made 11 starts last season, going 3-5 with a 5.54 ERA. Hitters swung and missed at 6.7 percent of his pitches, according to Statcast™. It was the fifth-lowest rate among pitchers who threw 900 or more pitches. He had 22.5 percent of his pitches put in play, the seventh-highest mark in MLB.

“The first thing I took [from last season] is I knew I could pitch in the big leagues,” Eflin said. “That’s something I need to prove now again, start after start.”