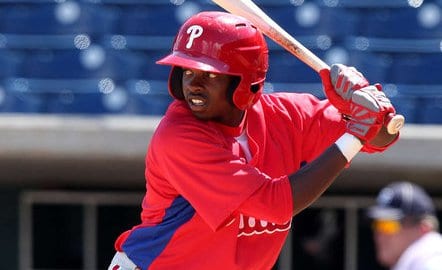 Manager Pete Mackanin had Roman Quinn, J.P. Crawford and Maikel Franco hit in the top three spots in a 4-4 tie with the Blue Jays in a Grapefruit League game at Florida Auto Exchange Stadium.

Quinn and Crawford are two of the Top 100 Prospects in baseball, according to MLBPipeline.com, and Franco’s rookie season in 2015 has the Phillies thinking they have a middle-of-the-lineup hitter on their hands.

“Facing Dickey,” Quinn said, “that was a cool experience, man. I really enjoyed it.”

Crawford said when he saw the lineup, he could not help but think about the group being in the big leagues together in the future.

“I think about it all the time,” Crawford said.

Quinn and Crawford are expected to open the season in either Double-A Reading or Triple-A Lehigh Valley. From there, their play will dictate their big league arrival.

But yesterday, they at least got to get on the field together. It was the first time Quinn said he had faced a knuckleballer, much less a former Cy Young Award winner like Dickey. Crawford said he faced a couple last season.

Mackanin said he did not consider it particularly cruel to start a couple prospects against a knuckleballer.

“I want to see them,” Mackanin said. “I don’t care who’s pitching. I’d rather have those two guys facing them than our guys — that could set you back a little bit. But I wanted to get them at-bats as early as possible in the camp because they’re probably not going to go with us, and we need to get them at-bats if and when they go down.”