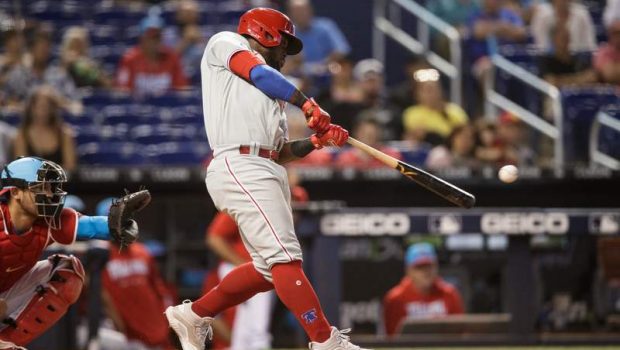 PHILS WOULD BE OUT OF PENNANT RACE WITHOUT ODUBEL HERRERA!

When this season began back in April, lots of Phillies fans objected to center fielder Odubel Herrera even being on the roster.

He was suspended for 85 games in 2020 for allegations of sexual assault in Atlantic City, and even though he was not prosecuted MLB set him down without pay.

So, last spring, when the talent-thin Phillies had to use Herrera in center field, there was legitimate criticism from men and women alike.

However, now that September is here and the Phils are only 2 games behind the Braves in NL East, the question must be asked:

WHERE WOULD THE PHILLIES BE WITHOUT ODUBEL HERRARA?

Herrera hit an RBI single in the 10th inning yesterday and the Phillies averted a three-game sweep, beating the Miami Marlins 4-3.

Herrera had been 0 for 4 before driving in automatic runner Freddy Galvis from second with his hit off Dylan Floro (5-6).

“I faced that guy last night, so I knew to look for something middle in. I got the pitch I wanted,” Herrera said. “Everybody’s excited now. We just have to continue to stay positive.”

Herrera has played a serviceable center field and he is hitting .261 with 12 home runs and 43 RBI’s, slightly below his career averages.

Not exactly All-Star numbers, but on a team that is desperate for offense it’s pretty good.

“I knew Ian was fresh coming in,” Phillies manager Joe Girardi said. “You don’t plan to use your closer two innings, but he had a quick (ninth) and I felt he was pretty rested.”

Girardi knew Kennedy had the poise to handle the extra workload.

Miami tied it at 3 with an unearned run in the sixth inning. Jazz Chisholm Jr. reached on an error by first baseman Brad Miller and later scored on Bryan De La Cruz’s grounder.

After managing only one walk in the first three innings against Miami starter Elieser Hernandez, the Phillies’ broke loose in the fourth. Harper homered, and Galvis hit a two-run drive for a 3-1 lead.

Harper, who enjoyed a surge at the plate in August, began the day with only a single in eight at-bats in the first two games of the series.

Despite losing the series after coming to Miami riding a six-game winning streak, Harper feels the team can go to Milwaukee with confidence.

”“We didn’t play well at all, myself included, but it’s time to put this series behind us,” Harper said. ”(Kennedy) was dominant those last two innings, and our bullpen as a whole got the job done today.”

De La Cruz recovered nicely after being hit by a pitch in his first at-bat, connecting for a solo homer in the fourth.

Miami took an early lead against Sam Coonrod, a reliever who went 1 1/3 innings in his first major league start, on a bases-loaded grounder by Isan Diaz in the second inning.

Marlins’ manager Don Mattingly was pleased with the series win and the way the team battled throughout Sunday’s game.

“We didn’t get a whole lot going today, but there was a lot of fight in us, that’s for sure,” Mattingly said. “Definitely not the outcome we wanted, but they hung in there.”

Philadelphia missed a chance to add to its lead in the sixth after J.T. Realmuto greeted reliever Zach Thompson with a double. The former Marlins catcher advanced to third on a sacrifice bunt by Harper — his third in the last seven seasons — but was left stranded.