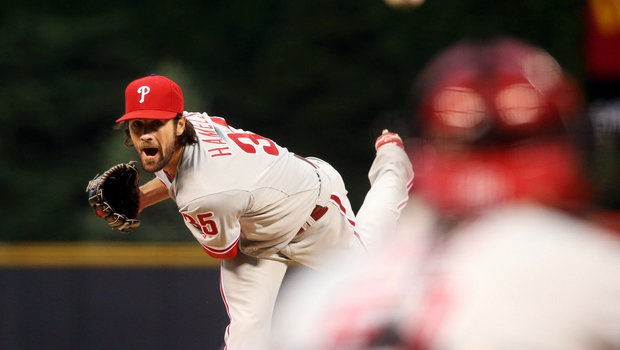 This is what happens when the Phillies give Cole Hamels some run support.

The Phillies win and extend their winning streak to six games.

Hamels (above) pitched efficiently into the eighth inning and Odubel Herrera broke a tie in the sixth with a two-run double for a 4-3 victory over the Colorado Rockies Monday night.

Philly is on its longest winning streak since a seven-game run in September 2012.

Herrera had the decisive hit when he sent a two-out fastball from Jordan Lyles (2-4) into right field to make it 3-1. Carlos Ruiz added an RBI single.

Earlier in the game, Herrera lost a routine fly in the lights that could’ve led to a big inning. But Hamels struck out two straight to quell the rally.

Lyles went six innings, giving up four runs in his first start since being hit on the right hand by a line drive last week.

Hamels threw 105 pitches before being taken out for reliever Luis Garcia, who allowed an RBI single to Carlos Gonzalez. With two on and one out, Wilin Rosario struck out and Nick Hundley flied out to keep it a 4-2 game.

Hundley was ejected for arguing with the first base umpire over a check-swing call earlier in his at-bat.

Jonathan Papelbon pitched a rocky ninth — giving up an RBI single to Charlie Blackmon with two outs — before striking out Nolan Arenado to earn his 10th save in as many chances.

Hamels worked his way out of a sticky situation in the fourth, when Herrera couldn’t locate a lazy fly until it was too late. That resulted in a double by Drew Stubbs, putting runners on second and third with one out. Hamels struck out DJ LeMahieu and Lyles to escape.