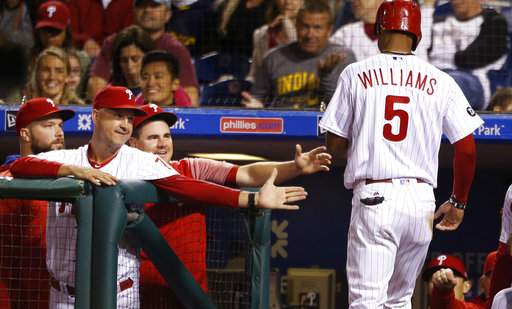 Earlier in the day, the Phillies (65-95) announced that manager Pete Mackanin would not return to the dugout in 2018. Mackanin was given a role as a senior advisor to general manager Matt Klentak.

“It has been difficult,” Franco said. “He gave everything he had out there. He’s a good person and a good manager.”

Franco, who has been the subject of criticism for most of the season and has been benched in recent weeks to give converted shortstop J.P. Crawford a chance at third base, connected on a two-run homer off Mets starting pitcherMatt Harvey (5-7) in the second inning to give the Phils a lead they would never relinquish.

“I’m always feeling confident,” Franco said. “Every time I see that I’m not in the lineup, I try to get mentally ready and that’s what I’m trying to do right now.”

“He needs to make an adjustment,” Mackanin said. “When he does, he’s going to be good.”

Alfaro and Hernandez added solo homers in the sixth inning to extend the lead.

Nick Williams, Odubel Herrera and Alfaro all had two hits for the Phillies.

The Phils’ bullpen received scoreless innings from Adam Morgan, Luis Garcia and Hector Neris to secure the win. Since Aug. 27 the Phillies’ bullpen has posted a 2.44 ERA.

Harvey struggled in what was his final start of a disappointing season. In addition to the two runs allowed on Franco’s home run, he allowed two more runs in the third inning — including one on a balk when his attempted pitch to Franco slipped out of his hand.

“The positive is that this nightmare of a season is over for me,” Harvey said.