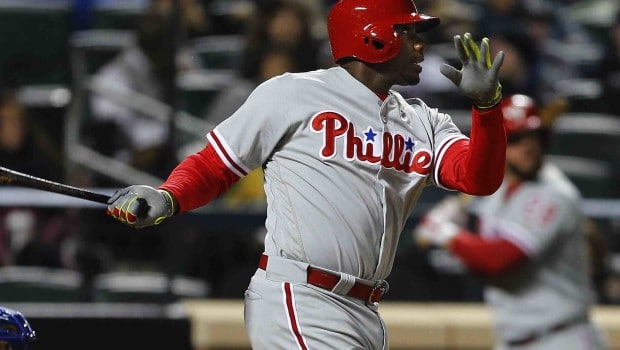 Howard’s 421-foot home run to center field in the fourth was his second in as many nights. The native St. Louisan is hitting .336 with 23 home runs and 69 RBIs and is averaging a home run every 10.6 at-bats for his career against the Cardinals.

Hometown hero Ryan Howard came back to St. Louis this week, and he did all he could to win a game last night with a towering home run.

But the Cardinals stunned the Phils with a two-run ninth to celebrate their first walk-off win of the season, a 5-4 victory.

The Cardinals entered the ninth down 4-3, but immediately stirred against closer Jeanmar Gomez. Pinch-hitter Kolten Wong opened the inning with a seven-pitch walk and moved to third when pinch-hitter Matt Adams drove a ball off the top of the wall in center. Stephen Piscotty plated the tying run with an infield single before Matt Holliday snuck a single to left for the win. More >

“That guy’s a sinker ball pitcher, and I thought he might try to pitch me in,” Holliday said after collecting his eighth career walk-off RBI. “So I wanted to see a pitch and was just trying to hit a ball hard. It was an important game for us to win.”

The blown save was Gomez’s first in 10 opportunities.

“I’m disappointed in the first hitter,” Gomez said. “The first hitter I had the walk, he tied the game. I have to make a good pitch in that situation.”

While the Cardinals snagged a win, starter Mike Leake still hasn’t. He retired the first 10 batters he faced before being ambushed in the fourth. A single and walk brought the inning to Howard, who belted a 2-0 pitch into the center-field grass for his 23rd career home run against the Cardinals. A solo homer from Odubel Herrera the following inning nudged the Phillies’ lead to four and kept Leake winless in his first six starts with the team.

Phillies starter Adam Morgan eased through four innings before being chased in a fifth-inning that saw the Cardinals score three runs with the help of two replay reviews. It marked the Cardinals’ second comeback out of a four-run deficit this season.

“You can absolutely build on it,” Piscotty said. “It’s a lot of fun to jump around kind of like idiots out in center field.”