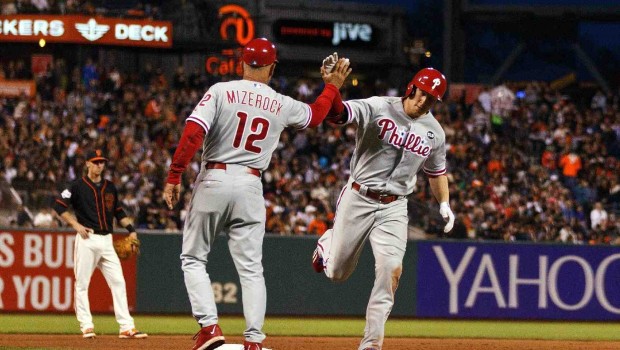 PHILLIES WASTE HOWARD, ASCHE HRS IN 8-5 LOSS TO THE GIANTS

It wasn’t as one-sided as Friday night’s 15-2 loss to the Giants, but the Phillies had a lead and lost it Saturday night in San Francisco’s 8-5 win.

Ryan Vogelsong, who allowed four runs in 5 2/3 innings, served up home runs to Ryan Howard and Cody Asche (above) in the top of the sixth. But the Giants answered in the bottom half with Angel Pagan’s two-run double, Duffy’s triple, and Buster Posey’s RBI single.

“These guys have been champions for a reason,” Howard said of the Giants. “Champions don’t quit. They get down early and these guys just continue to fight.”

David Buchanan, who made his first appearance in the Majors since April 30, fired five innings of one-run ball, only to watch his successors squander a three-run lead.

The Giants couldn’t get much going against Buchanan but were able to feast on the Phillies’ bullpen during the big outburst in the sixth. With two outs and runners on first and second, Pagan started off the scoring by roping a two-run double down the right-field line. After Joe Panik walked, Duffy put the Giants ahead with his two-run triple to right-center. Posey capped off the barrage by poking through a soft single to right to drive home Duffy.

“To kind of pick [Vogelsong] up there, it’s a pretty good feeling,” Duffy said. “Any time you get a comeback win, it’s a big boost.”

Howard stepped to the plate with no one on and two outs in the sixth and drove a 1-1 curveball to right-center field that barely cleared the “Levi’s Landing” sign. Replay officials took a second look at the play and determined the ball hit the green roofing above the brick wall, confirming the call on the field of a home run. Howard’s homer, his 15th of the season, gave Philadelphia a 2-1 lead.

Two batters after Howard’s blast, Asche chased Vogelsong from the game with a two-run bomb that landed with a splash in McCovey Cove. The homer stretched the Phillies’ lead to 4-1, which the Philly bullpen could not hold.”You score five runs and get nine hits, you should win those games,” interim Phillies manager Pete Mackanin said. “You have to win those games.”The Phillies lost their 61st game of the season, the most losses the team has had before the All-Star break since 1997. Philly is the first team to lose that many games before the break since the Houston Astros in 2011 (30-62).

0 thoughts on “PHILLIES WASTE HOWARD, ASCHE HRS IN 8-5 LOSS TO THE GIANTS”