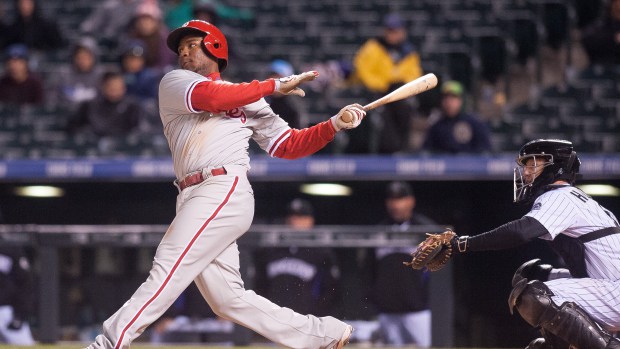 Just ask any Philly sports fan who had gotten used to the Phillies’ new energy and six-game winning streak.

Justin De Fratus wanted to bury a slider in the dirt to Nick Hundley with two outs in the eighth inning last night in Denver as the Colorado Rockies beat the Phillies 6-5 .

It was one too many mistakes after a successful week for the Phillies. They almost made it seven in a row after rallying from deficits of 3-0 and 5-3. De Fratus (0-1) came on to start the eighth and struck out the first two batters before hanging a pitch to Hundley.

“Disappointed. My mind is in my right spot, I knew what I wanted to throw and it was the right pitch. Literally the one spot that pitch could not go,” De Fratus said. “I get two quick outs and you’re feeling good and literally one pitch changes the entire game. It’s tough.”

Scott Oberg (2-1) earned the win by getting the Rockies out of a jam in the eighth. John Axford pitched a perfect ninth for his fifth save as a steady mist began to fall.

Troy Tulowitzki gave the Rockies a lead in the seventh with a two-out, two-run bloop double that landed just beyond right fielder Grady Sizemore’s outstretched glove.

The lead didn’t hold up. Boone Logan gave up a two-run single to Maikel Franco in the eighth. Logan left with the bases loaded and one out, but Oberg bailed him out by getting Carlos Ruiz to hit into an inning-ending double play.

“I have a lot of confidence in him coming through there,” manager Ryne Sandberg said of Ruiz. “He’s going to put the bat on the ball.”

The Rockies struck out 10 times. They’ve fanned 10 or more times in a club-record seven straight games.

Chad Bettis settled down after a shaky start in which he allowed three runs through the three innings. Bettis retired his final seven hitters before giving way to reliever Rafael Betancourt in the seventh.

Aaron Harang was effective, too, after an inauspicious beginning. He allowed three runs — all unearned — in the first. After that, he was virtually untouchable, giving up just one hit over the next five innings before being removed for a pinch hitter in the seventh.

“I didn’t feel as sharp I have been,” Harang said. “The guys were fighting all night and it came down to one extra mistake made.”

Down 3-0, Philly got run-scoring doubles from Chase Utley and Ruiz in the second. Franco then tied the game an inning later with an RBI single up the middle.