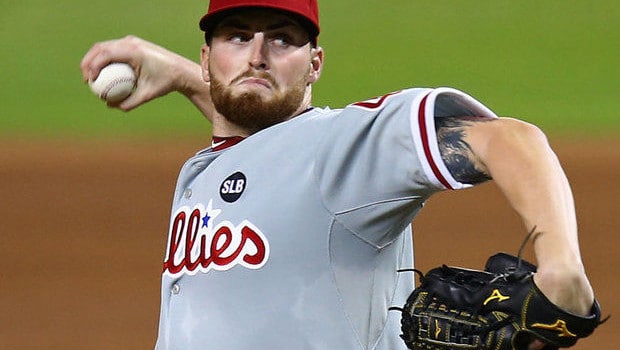 Even Alec Asher’s superb pitching performance and his bat couldn’t keep the 57-96 Phillies from hurtling closer to the 100-loss mark for the 2015 season.

Rookie Asher put together a solid performance Thursday night in a 1-0 loss to the Marlins at Marlins Park. He allowed three hits, one run, one walk and struck out four in seven innings, making it the best start of his five-start career.

And he picked up two hits, including the Phillies’ only extra-base hit of the game.

“I feel like with each start I’ve taken, I’ve kind of built more confidence,” Asher said. “That was the main thing coming into this game. I said I’m just going to go back to pitching my game and attack hitters and not give them too much credit.”

Asher, acquired in July as part of the Cole Hamels trade, makes his final start of the season Wednesday night against the National League East-leading Mets at Citizens Bank Park. He hopes to carry Thursday night’s success through that start and pack his bags for the offseason feeling better about spring training 2016.

“You want to finish strong,” Asher said. “That’s the main goal. I know I’ve started 0-5. I don’t want to start my career like that, but there’s nothing I can do about those past games. But take the two here and finish strong.”

Asher had allowed just one hit through six innings when Marlins third basemanDerek Dietrich hit a slow roller up the third-base line for a single. Marlins catcher J.T. Realmuto followed with a triple to score Dietrich for the game’s only run.

“As poor as his numbers are, it shows me a lot that he came out there like he had a purpose,” Mackanin said. “That’s what the whole deal is about when you get to the big leagues. Either you fight and you make it, or you give up. Obviously, he’s not giving up. He’s going after it. That was the thing I saw tonight.”

Asher figures to be in the mix for a rotation job come spring training, with Aaron Nola and Jerad Eickhoff favorites for two spots. “Some guys it takes longer for them to feel comfortable and I’m hoping that’s the case with Asher,” Mackanin said. “He looked very comfortable and he looked aggressive out there, like he was in charge.”