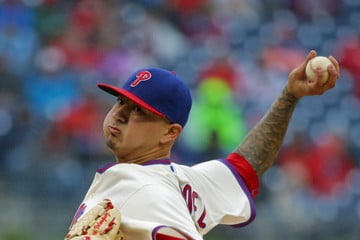 Phillies starter Vince Velasquez has been closed down for 2017.

He will have surgery later this week to repair a vascular problem that caused pain in the middle finger on his throwing hand. The Phillies placed Velasquez on the 60-day disabled list.

“Vince has had his fair share of setbacks throughout the year and throughout his professional career, but we still believe really strong in his future,” general manager Matt Klentak said.

Klentak said Velasquez does not have thoracic outlet syndrome, which has slowed the careers of several standout pitchers, most notably New York Mets ace Matt Harvey.

Klentak said Velasquez’s issue is located near his armpit and the recovery period for what he described as a “small procedure” would be six to eight weeks.

“Vince will have a full offseason and be ready for spring training,” Klentak said.

He threw just 72 innings and was 2-7 with a 5.13 ERA this season. Velasquez also missed six weeks earlier this season with a right elbow flexor strain.

Velasquez missed time last season with a right biceps strain. He underwent Tommy John surgery in 2011 when he was a Houston Astros minor league prospect.

“One of the things you want to see, especially from a starter, is durability,” manager Pete Mackanin said. “He hasn’t been durable because of various reasons. That’s something we have to keep an eye on.”